Until yesterday, I was extremely happy with Ghostery -- the add-on used to show the location/address of a tracker, and include cookies in its blacklisting. However, with the recent v6.0 update, much of the technical details are gone. The Ghostery blog says a technical version will come out in a few months, but I fear this will be a premium service.

I also do not like how Ghostery now shows popups asking me to take surveys. This happened shortly before the 6.0 update.

I am looking for the following features in a tracker-blocker alternative to Ghostery:

So far, the possible alternatives I found were Disconnect.me and Lightbeam; however, these have not been updated in months and have unresolved GitHub issues.

First, Ghostery is made by Ghostery Inc. an ad company. I'm sure their research is respectful but it is good to know about it at least.

I would try Privacy Badger made by EFF. The way it works is that it checks the requests (mainly third party ones) made by the browser and builds a blocklist based on what it detects. The upside of this is that it changes and adapts to any new tracking, the downside is that you need to visit the site and get tracked at least once before it starts working properly and it doesn't currently block the tracking made by the first-party, aka if you visit Google it will allow Google to track you on Google.com.

Their webpage covers more on how it compares, I quote:

Privacy Badger was born out of our desire to be able to recommend a single extension that would automatically analyze and block any tracker or ad that violated the principle of user consent; which could function well without any settings, knowledge, or configuration by the user; which is produced by an organization that is unambiguously working for its users rather than for advertisers; and which uses algorithmic methods to decide what is and isn't tracking.

Basically, the second choice has one big advantage and a few (hopefully minor) drawbacks:

Being in the same boat with the Ghostery 6 update and thus looking around, I just stumbled upon an interesting discussion on Ghostery vs Connect.Me vs. uBlock, so I tried for myself:

While findings were not identical, they were pretty close (note that, other than with Ghostery, the badge on Adguard's icon doesn't indicate the amount of sites blocked, but rather the amount of URLs): 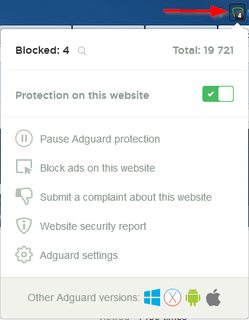 Like Ghostery, Adguard places a little icon which gets a "badge" on top whenever something was blocked – and which can be clicked for details. Central actions are available from the popup showing up then. Amongst others, clicking the little glass icon next to "Blocked" reveals what was loaded and what blocked (unfortunately one has to reload the page after opening that window). 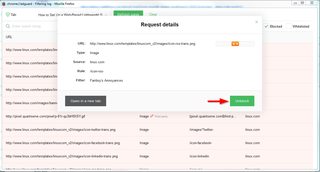 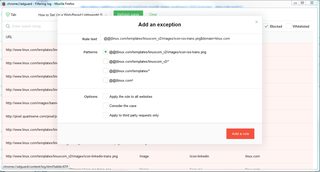 Quite intuitive: Clicking a blocked URL (all read in above screenshot as I've limited the display to blocked URLs, as one can see by the corresponding checkbox) gives you details on the blocked element and the related rule, plus the option to add an exception. The latter looks quite limited to experienced users (only radio buttons, no edit possible) – but should be fine for not-so-advanced (or tech-savvy) folks. The former go to Adguard Settings afterwards (see first screenshot), scroll down a little, and edit their rule(s):

Note the (green) link in the screenshot: if you need help with the rule syntax, it's right there. Also note that I've changed my exception to look exactly like the rule that blocked the element, and just prefixed it with @@ to mark it as exception (same syntax as with Adblock Plus etc, by the way).

Being asked for in the comments, I cannot say I recommend AdGuard over uBlock or really compare the two against Ghostery (I didn't dig deep enough into them for that). I've just replaced Adblock Plus by Adguard a while ago (wanted open source without dubiosity, and save some resources ABP was hogging). Tried uBlock for a few days before that and had some issues (which in an afterthought might not have been uBlock's fault at all).

As for ABP/Adguard/uBlock, they all seem to use the same lists and thus should have the same effect. I've liked to combine one of them with Ghostery for the ease of having the latter working on the Trackers (just toggle a switch to keep the ones you wish) while being able to maintain my own supplemental rules with the former. So kicking out Ghostery might make maintenance a bit more work (having to apply manual exception rules instead of flipping a switch), but should have the same results on content while saving some resources (one addon less).

Do Adguard/uBlock block as much as Ghostery? Not out of the box, one has to enable the appropriate filters first as I've pointed out above. I'm currently running with these additions:

I don't remember which lists were enabled by default, and which others I've enabled manually back when I've switched to Adguard. On whether Ghostery (or some replacement) is still needed with those lists activated in Adguard/uBlock, please take a look at easy privacy and DNTM. Discusses this and similar combinations ;)

Not the answer you're looking for? Browse other questions tagged firefox privacy cookies or ask your own question.