Sometimes I'm on a 27" screen with a crazy resolution of 2560x1440 that allows me to put windows on each corner and still have, essentially, four 1280x720 windows, which is great, but tedious, since Windows only includes shortcuts for putting windows to the sides, i.e. via Win+← and Win+→. (I recall some time ago my company's desktop had something like NVidia Desktop Manager that might have allowed docking to corners, but the software was buggy and unstable.) So the first part of my question is: Is there a program for docking windows to corners via keyboard shortcuts?

Of more interest to me, personally, though, would be a program that would furthermore allow me to configure the size of windows docked to each corner: 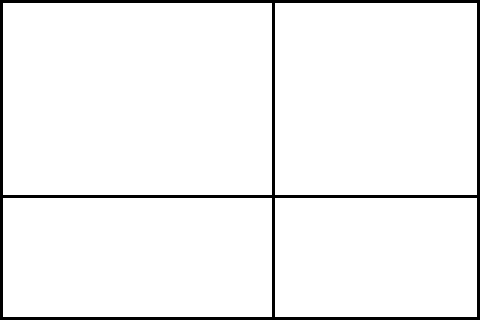 This is because I don't always have the luxury of working on a 2560x1440 screen and evenly sized quadrants would be impractical to use on lower resolutions, but, workable if some windows could be proportioned larger than others. For example, in the above illustration, I might place Visual Studio on the "main," upper-left dock, have a debugger up on the upper-right dock, have a browser window open on the lower-left dock, and have a console or terminal open on the smallest dock.

Any pointers would be greatly appreciated.

I found that Moom does this for Macs!—so the concept exists... 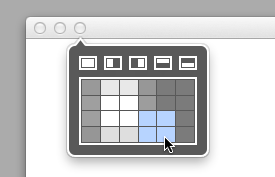 WinSplit Revolution does exactly what you want and pretty much nothing more. It lets you dock windows to any position on your screen using Ctrl + Alt + (numpad key).

You can specify multiple options for each key on the numpad, too.

By default, the 7, 9, 1 and 3 keys are assigned to the corners of the screen. I use this for a dual-monitor setup where one screen is 2560x1600 and the other is 1920x1080, and the program is smart enough to know the difference in sizes and where the monitor borders are.

The software is slightly buggy in my experience. Sometimes it won't allow certain windows to be certain sizes, or it'll skip one of your entries for a certain key combination if you have multiple entries configured. I haven't found a pattern to this weirdness, but resetting all the rules seems to help, and unless you have a dozen entries mapped to a particular numkey, it's not all that bothersome. 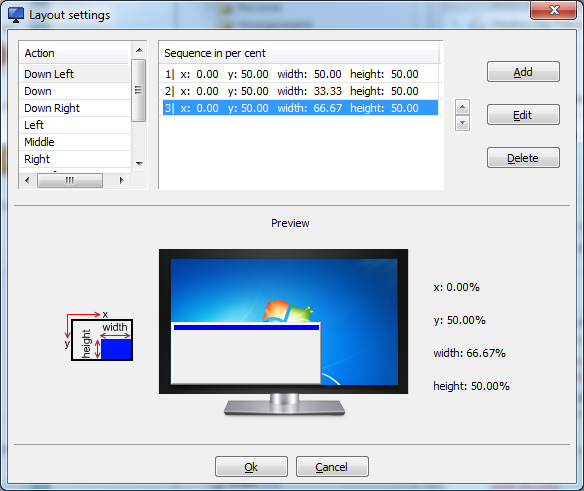 I have been using AquaSnap for a while and it works for me. It is very cheap to purchase. And I don't work for them. It has numerous options for snapping to sides, corners and to other windows. With all hotkeys easily assignable.

Since you already mentioned Moom for Mac OS, let me refer to a similar tool for Windows: Divvy

On my machine, it works best when I click the taskbar icon. However, that requires long mouse moves. I'd prefer being able to e.g. middle-click on a title bar of an application for the resizing dialog to appear. Unfortunately that's not implemented.

On Windows 10+, the free Microsoft PowerToys includes one tool called FancyZones that does exactly what you need.

5
What's a piece of software that expands the snap feature of Windows 8.1?
3
Windows software to move any window between multiple monitors (screens) by using keys BUT without resizing the moved window
0
Tool that pastes multiple values into multiple fields
4
Tiling window manager for Windows
2
Software to handle another program's window like an auto-hide taskbar
2
Software to keep profiles for monitor resolution, relative positioning, and font size, for Windows 10?