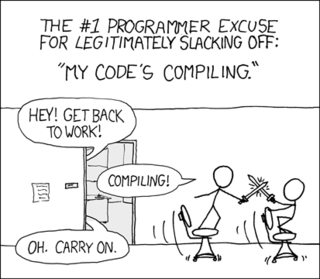 I'm interested in a distributed build system, either at the lower-level of running the equivalent of make, and not knowing anything about anything other than dependency rules, or at the higher level of something like CMake or SCons. The system must (make an effort to) utilize all cores on a group of machines.

Suppose I have the following sources, intermediary targets and final target: 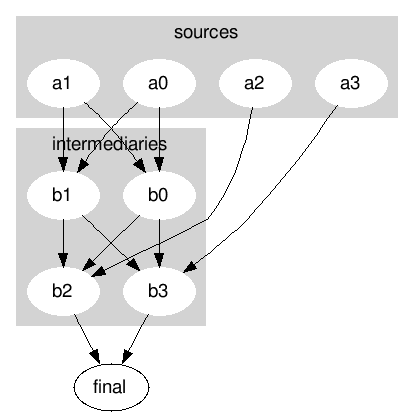 and suppose building each of this takes a significant amount of time, and I have two machines.

The build system will have one machine build b0 and a second machine build b1, then one machine build b2 and another machine build b3 - and it will make sure only the relevant sources are copied/made available on relevant machines as soon as possible, not just after previous intermediaries are done. And it will determine these dependencies by looking at the source file and minimal additional information I provide - similarly to CMake+make.

May or may not:

Pick a command line tool to automate builds that get run when you type "./build.sh" (linux) or "build.cmd" (windows)

Now pick a web based continuous integration tool to schedule the build or run it automatically when someone checks in code:

A. jenkins - The big guy out there. Also there's hudson which is what Jenkins is a fork of, but I think hudson is basically dead. Free.

B. GitLab CI - A newcomer, but really handy if you want your automatic builds to occur whenever someone pushes to a git repo, and you want to have a choice of hosting the git server yourself or having it be on the internet, this is a great choice. And free.

Now create jenkins jobs for shared components. Now distribute those artifacts to the secondary stages. Find parallel build opportunities yourself and build your jenkins tasks so there is a "pipeline". Distributed builds take human ingenuity to design and do not self optimize and self-discover and self-distribute binary intermediates.

Again, what's wrong with your request in my view is that you need to think of the web thing as a "layer" of your build system, and your command line build tool as another layer.

Not a perfect solution, but CruiseControl's Distributed Plugin allows a rudimentary form of build distribution:

[...] allows a master build machine to distribute build requests to other physical machines on which the builds are performed and to return the results to the master.

The Ant task will not be executed on the machine that runs CruiseControl ("master"), but instead will be executed by one of the available agent machines (separate machines running a specific agent software).

You can filter agents so that a particular tasks is only executed on a Linux 64bit agent, for instance.

Weak point: Dependencies are not resolved by the system. You have to find them by yourself and then write your build script accordingly.

Not the answer you're looking for? Browse other questions tagged gratis open-source software-development distributed or ask your own question.