I need a self-hosted replacement for Github. It is crucial it works on firewalled intranet, with no access to the Internet (for example, styles, license checks, etc.).

Must be either open source (which means it is okay if it is missing some minor functionality) or affordable (>2400€/year for 30 users is too expensive).

I know there is at least:

But I don't have experiences with these - this list is not excluded from answers in any way. However, as I already know there are some alternatives, so I'm not looking for a list of possible solutions, but recommendations based on what you have used and tried. I can use a search engine too, so there is no need to post answers with only copy-pasted content from the first hit.

We've used GitLab for over a year to host projects of my students.

TL;DR;EDIT: there used to be a demo, but now it's missing. You can register for free and create some public repositories.

I must say I am really satisfied.

As an iteration through your requirement is encouraged on this site, I'll do just that.

It's under active development with a new release every month, so it's definitely worth trying. It's open-source, free for commercial use.

An Internet connection is not required for Gitlab to work. You will need Internet to set up Gitlab because it downloads its dependencies from RubyGems. Alternatively, you can build a RubyGems mirror, or do the install on another server and copy the complete install directory (by default /home/git/) to this server. 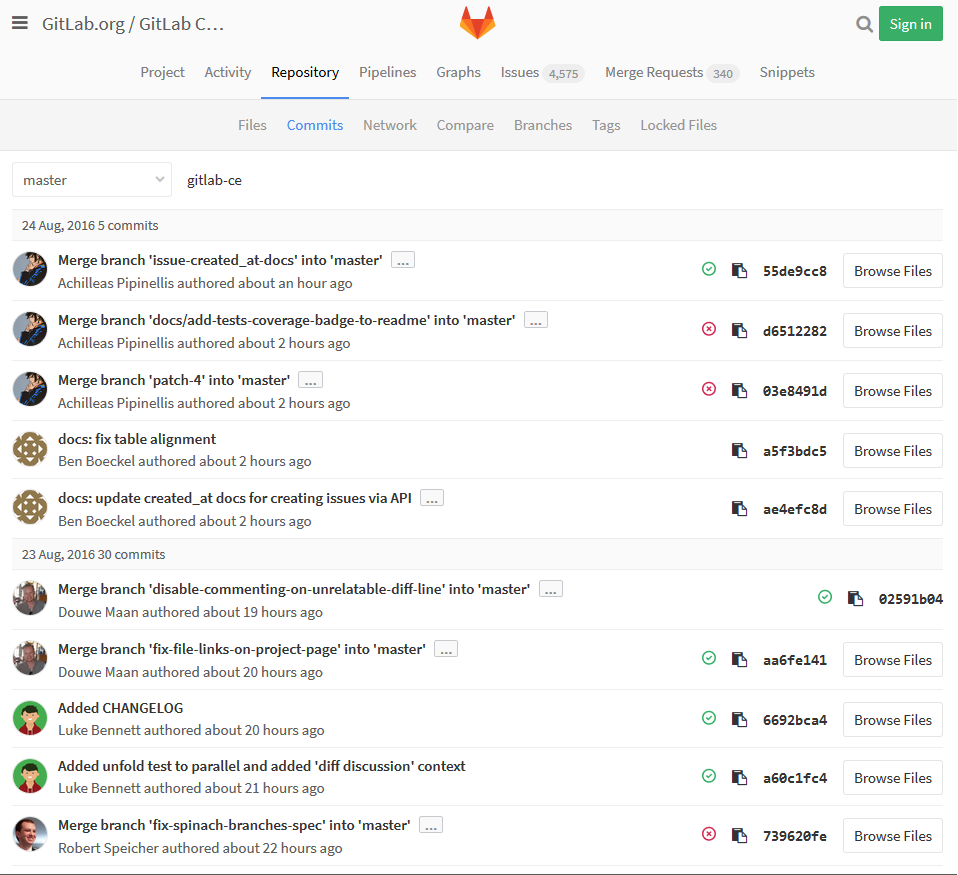 We use Atlassian Stash along with Jira for issue tracking.

Of course, to address your requirements

Gogs (Go Git Service) is a painless self-hosted Git Service written in Go. An alternative would be its community-driven fork Gitea.

I've tried this one and I have found it quite appealing. Simple interface, feature almost on par with what I would expect from a GitHub look alike, and maintainer eager to implement feature and fix bugs. The installation is dead simple. Drop the binary in a folder and call it from the command line. The initial configuration is through a config file. And it has Git and Web hooks. Anyway, I hope the following answer the question even if a bit late. 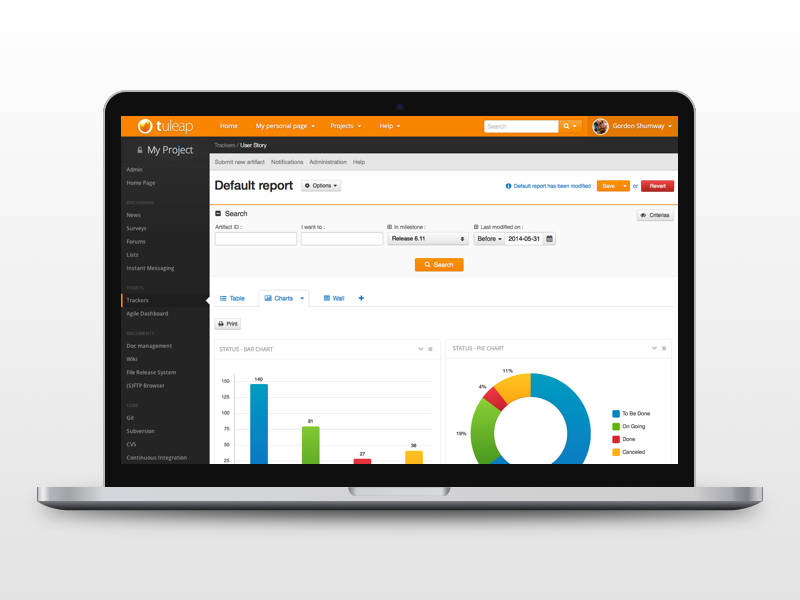 Plus (as it's a complete ALM, it's not limited to code management)

It's 100% Open Source (GPLv2) and you can get professional support from Enalean.

I have been trying out gitstack for the last couple weeks. I haven't yet fully explored it (ah time is always so short). I'm going to use mainly screenshots from their features list since I'm on the wrong computer right now (and on the wrong network FWIW)

GitStack is opensource and the sourcecode is on github. Released under GPL as noted on their features page - all features currently although in the future they may add new features to the paid versions and not the free version but as of the November 2013 release that has not happened yet.

In regards to pricing:

UPDATE 2015: Gitorious will be merged into GitLab, so see the GitLab answer.

Gitorious is a Git hosting and collaboration software that you can install yourself.

It is open source, and you can try it at gitorious.org 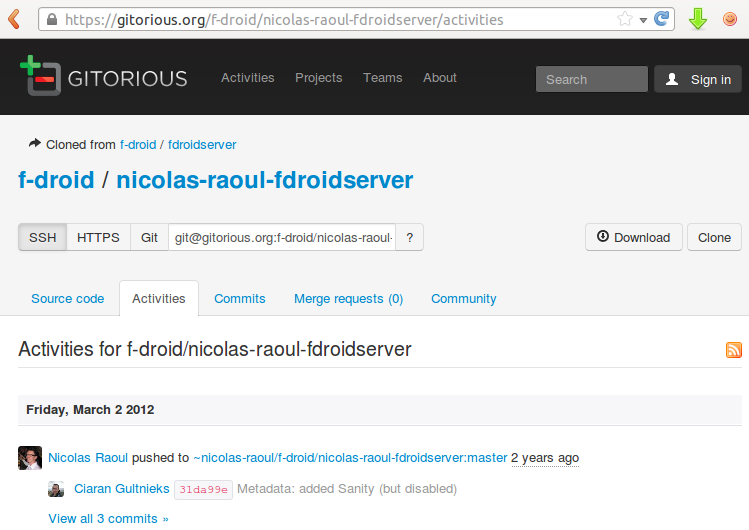 RhodeCode Enterprise is free for 10 users, NGOs and EDUs. It is written in Python, used in production at 10,000+ organizations and was hardened and tuned by these organizations over more than 3 years.

Disclaimer: I am a RhodeCode co-founder.

As it's not yet listed in the question, nor in the previous answers, there's also Deveo that supports the requirements. There's a free tier we are launching for 5 users, after which the pricing is 36€/user/year.

Deveo supports both, in addition to Subversion (SVN)

Both SSH and HTTPS are supported.

All of the above use cases are supported. In Deveo, repositories are grouped inside projects, which means you can have backend and frontend repositories in the same project. There's a fine-grained access control that can be utilized both at the project level and also on a repository level. The same permission scheme naturally applies to both repositories and Web UI. Deveo can be integrated to LDAP/AD and in addition, you can configure Deveo to authenticate against a SAML 2.0 based single sign-on service.

Pull requests are supported at the moment within the same repository. You can set a number of approvals required before the changes can be merged, and even require a passing build for the branch before the merge can be conducted.

Deveo supports multiple levels of access for creating repositories and granting access. The access control is role based which makes it simple to understand and use.

Deveo has a built-in issue tracker that resembles Trello. You can create milestones, which act like trello boards, and drag&drop the issues from a state to another. There's possibility to comment on the issues, add attachments, assign people, label the issues and more.

You can search most of the content in Deveo.

Forking is supported from the UI.

Update: It seems that RhodeCode is NOT actually closed source, it's got a community edition (open source) and some Features (enterprise) are closed source. Given that, I'm not sure how active the Kallithea fork would remain.

Kallithea began as an open-source fork of RhodeCode, the fork was started because RhodeCode went closed Source. Kallithea is free.

It supports Git and Mercurial repositories. It has, not surprisingly all the same user interface as the 2013 edition of RhodeCode.

This is a complement to Piotr Zierhoffer's GitLab answer.

I too have looked into solutions for this (over the last couple of years) and found GitLab to be the most suitable in terms of features, usability, and license. I was pleasantly surprised at how similar it is to GitHub. The answer posted above is superb.

What I'd like to add is that you don't necessarily need to install it from scratch or use the hosted service (or a third-party like GitHost). There are a few VPS and cloud hosting providers that have "one-click" setups for GitLab, and there are images and containers for Amazon Web Services and Docker.

For instance, I recently switched VPS hosting provider to DigitalOcean and was happy to find that they have a one-click "droplet" for GitLab (as well as tutorials for both one-click and manual installation). As for cloud hosting, Amazon EC2 is very affordable and I've seen plenty of tutorials and at least a couple of popular images for GitLab.

Again, apologies for making this a separate answer—I hope you don't mind. I really wanted to mention it, as it can be of value to people looking for the most cost-efficient way of running the software recommended in the accepted answer.

(If anyone is using any of these, it would be interesting to know how it worked out in terms of setup, maintenance, and performance.)

Not the answer you're looking for? Browse other questions tagged web-apps software-development git or ask your own question.