What software should I buy to have a macOS VM on my Linux machine?

I work on a Linux machine, but I teach people who also work on Windows and macOS. In order to see things from their point of view, I would like to also have access to the Windows and macOS operating systems.

Perhaps the easiest solution would be to buy two small PCs, one with each of those OSs, but that is expensive (think about buying an Apple product only to use maybe for a total of three hours/year) and cumbersome (I'd often like to work on clean installs, which means lots of time spent reformatting the machines). Then there's the physical space needed for the extra hardware.

The best solution to me seems like buying licenses for each of those OSes and installing VMs for them in my Linux PC and using them whenever necessary. I got the hardware to handle it, so I don't see downsides to this.

Last time I checked, Microsoft sells Windows licenses. However, Apple does not seem to sell licenses for macOS (or even allow one to use macOS on non-Apple hardware).

I've been using nothing but Linux for almost two decades now, so I really hope I'm going on outdated information here, and both Microsoft and Apple have made life easier for people in the same situation as me.

Observing the legality of things is important to me, since we're talking about using corporate funds for this.

As others have said, the only way to legally virtualize Mac OS X (according toApple's EULA) is on Apple hardware. So the purchase you need to make isn't a software purchase, it's a hardware purchase: you need to buy a Mac.

With Intel (x86) Apple hardware, there's three ways you can do this:

1. Use VMWare ESXi as the host OS

ESXi is VMware's professional server virtualization platform. As the base / host OS on an Apple Mac, VMware ESXi can virtualize Mac OS X guests, as well as virtually any other operating system which runs on x86 hardware, including Linux and Microsoft Windows. The core of ESXi which you would need is cost free; VMWare sells support licenses for ESXi with hefty license fees which you would not require.

I have been down this road and while it works, it's not for the faint of heart: ESXi needs to be managed via a web UI from another machine, and if you're going to use this as a desktop system (with a monitor and keyboard attached) then you need to have hardware (USB controller and GPU card) capable of PCI passthrough. Without PCI passthrough your attached monitor will simply display a text-only ESXi configuration screen.

Check VMWare's Hardware Compatibility List and focus on first or Mac Pro models. A Mac Mini will work but you're very unlikely to get Passthrough working.

At this time, VMWare ESXi does not run on an Apple M1 chips so you'll need an Intel mac for this option. VMWare says "we are committed to delivering VMware virtual machines on Apple Silicon" so this may change.

Buy a Mac (any recent x86 model) and virtualize Mac OS X, Linux and Windows using Mac OS X as the base / host OS. In this case you may need to purchase software. VMWare Fusion is the software I personally use and can highly recommend. Parallels is another option I am aware of. You can use VirtualBox, which is free, but support for Mac OS X guests is lacking so I would only use this for Linux or Windows guests.

The machine will boot into OS X, but you can configure a Linux VM to launch on boot, and use full-screen, multi-monitor support to use Linux as your every day OS, wither switching to a Mac VM for testing or, just using the Mac OS on the host. Linux runs well under VMWare, though graphics performance is not as good as on bare metal. This is an easy to use solution and the one I have migrated to (I used to use ESXi)

This solution works on an Apple Mac Mini, a Mac Pro, a Macbook Pro, and basically any x86 Apple hardware which is recent and powerful enough. No GPU passthrough is required.

You'll want to stick with Intel Macs and avoid M1 chips for this: VirtualBox only supports x86 virtualization, and while Parallels and VMWare both say they're working on M1 support, it's not here yet and I wouldn't advise being an early adopter.

3. Use Apple Boot Camp or Linux as main OS

Apple x86 hardware is capable of running Linux or Windows as it's main boot OS. Linux runs very well on modern Apple hardware, and if you only need Mac occasionally for testing, you can have the Mac booted into Linux for normal work and reboot into Mac OS X only as needed for testing. Linux can be installed to the Mac's main drive (on a separate partition) or an external drive, or even to an SD card (though I would only recommend that for a read-only root, like a LiveCD)

This option works with any Intel mac; Apple M1 macs do not support boot camp, and while Linux may support booting an M1 mac in the future, it doesn't sound like it will happen soon

4. Just keep an older, used Mac around for testing

Of course there's another option: don't virtualize, just have a cheap Mac that is kept for testing only. In this case, the processor architecture doesn't matter, unless it impacts the testing you will be doing on the mac.

There are multiple companies that rent out access to a Mac in the cloud. I used one of them for a few months when I had to port an Android app to iOS, which needs a Mac to compile. If you only need your Mac for a few hours per year, this is probably the cheapest option. Resetting "your" mac is just a question of a few minutes to get a new, freshly installed, VM.

I'm not affiliated with any of them, but searching the internet for "rent access to a mac" finds multiple such companies.

Is it possible (and legal) to buy a macOS license to have it as a VM on my Linux machine?

you are granted a limited, non-transferable, non-exclusive license:

(iii) to install, use and run up to two (2) additional copies or instances of the Apple Software within virtual operating system environments on each Mac Computer you own or control that is already running the Apple Software

So according to Apply, even in a VM you may only run MacOS on a "Mac Computer" (defined further above as an "Apple-branded computer running macOS"). By running MacOS in a VM on a Linux machine, you would violat this (the exception would be if you are running Linux on Apple hardware, which is possible - that would be ok, but that's not what you want).

Whether this restriction is actually legal and valid will depend on your jurisdiction (and possibly on the opinion of a judge), but that's out of scope here (you could ask on https://law.stackexchange.com/ ).

In addition to the (possible) legal hurdles, it appears MacOS actively refuses to run on non-Apple hardware (see e.g. the manual of VirtualBox, chapter 3.1.1, Mac OS X Guests). It is possible to circumvent this, but it's not trivial. For example, this article has a solution, but it's unsupported and does not fully work. This other article (German) claims to have a solution - I have not tested it.

If not possible, what are my other choices for catering to a crowd composed of Linux, macOS and Windows users?

The simplest solution would be to explain that you cannot help with problems caused by the environment / operating system - that should not normally be expected of you anyway. If you teach people using different OSes, the software which you directly use for teaching or as a subject is presumably cross-platform, so you can hopefully help with problems with that. If it goes beyond that, just politely explain that you cannot help.

In simple cases, you can also assist with looking for a solution (good web searching is a skill not everyone has), but since you do not have Apple hardware, you cannot help with Apple software.

I'm currently using Ubuntu, but there are still some apps I wanted to use on macOS. I found macOS-Simple-KVM.

However, there will be a bit of tweaking you'll need to do before being able to use the App Store on it, and it's limited to macOS Catalina.

For Windows, I just use VirtualBox and my purchased license of Windows 10.

Edit: My apologies. I just realized the mention of "Observing the legality ... since we're talking about using corporate funds for this". A Mac computer will definitely be needed.

You can legitimately download and run VM specifically for testing purposes (which is exactly what you are doing) directly from Microsoft at a price of $0.00. You just need to know where to go. It's currently on Microsoft Edge Developer site, but it periodically moves location for one reason or another.

They are available for:

N.B. These images expire after 90 days so you are recommended to make a snapshot after first installing. A good idea as it lets you roll back to a clean machine! 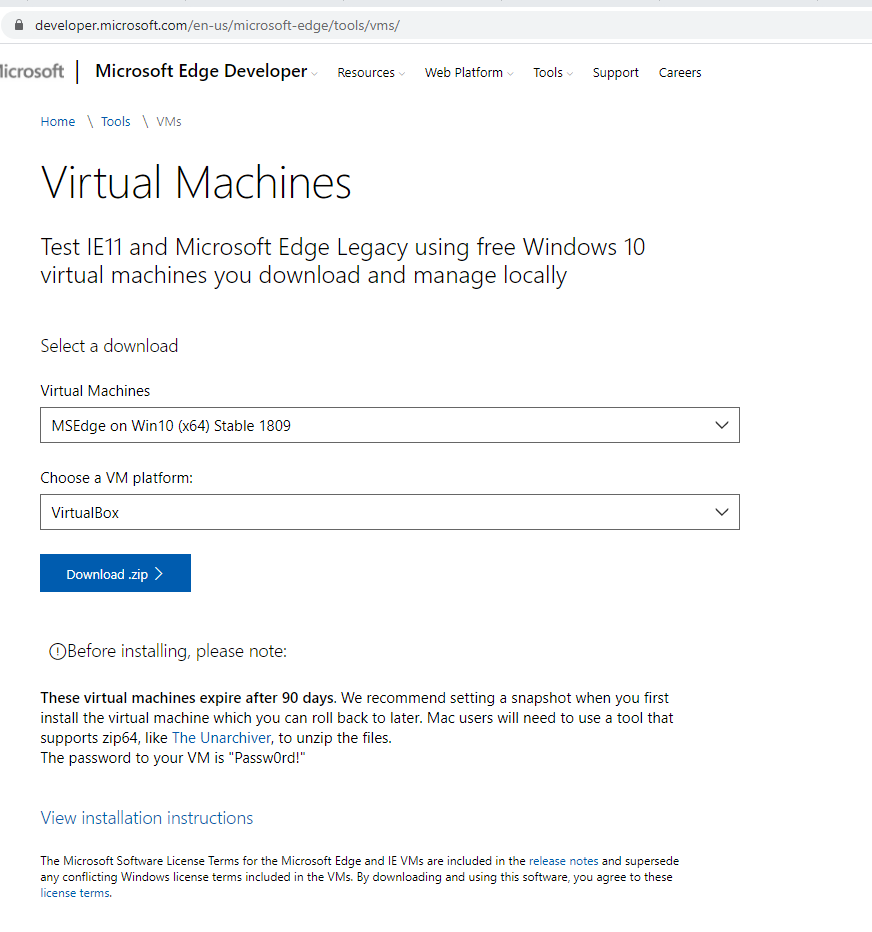 I believe that Apple have a similar scheme but you will need an Apple Developer ID to find it. You should be able to create one here by clicking on Account and then Create ID. It may be worth asking on the Apple Developers Forum.

You can also consider online test environments for Mac such as BrowserStack,

If you don't need to do the Mac side too often, and you aren't averse to spending some money, then maybe let someone else like MacStadium do the hosting and provide you with a Mac desktop in the cloud?

This page from the British Apple shop is selling "OS X Lion (10.7) £19.99". There are no qualification mentioned, so that should to the fine in a VM.

You can choose your own VM. I would say that 80% of the companies I work with choose Oracle's Virtual Box, which is free, even for commercial use, over VMware.

Observing the legality of things is important to me, since we're talking about using corporate funds for this

Then, run this past your legal department, or, at least, your boss.

Most common, in my experience, is that software developers are given Windows PCs, to fit in with the rest of the company, who are using MS Office, MS Outlook for mail, etc, and we then run Linux in VirtualBox for our software development and testing.

I have never used MacOS, but don't see any difference if the official Mac store is selling it. If you are totally paranoid, then:

Good luck, and, please, let us know how it turns out.

I hope taht his helps

Not the answer you're looking for? Browse other questions tagged linux osx macos virtual-machine or ask your own question.