This question is not about freezing / compilation tools like cx_Freeze, py2exe, pyinstaller or Nuitka.

I want to distribute a python app myapp as python package(s), packaged together with a python distribution and an installation script. I have used following workflow:

The steps 2-4 have been automated with a build.py. All good so long until the project grew and I had to separate mylib code from myapp code and now I have two interlinked packages: mylib and myapp. The build.py does not work after this refactoring. There is also a risk I have to refactor again into mylib1 and mylib2, for example.

Before I'm going to fix the broken build process, I would like to ask for the python community: Is there already a tool that would do automatic packaging of python package(s) + a python distribution? Am I reinventing the wheel? 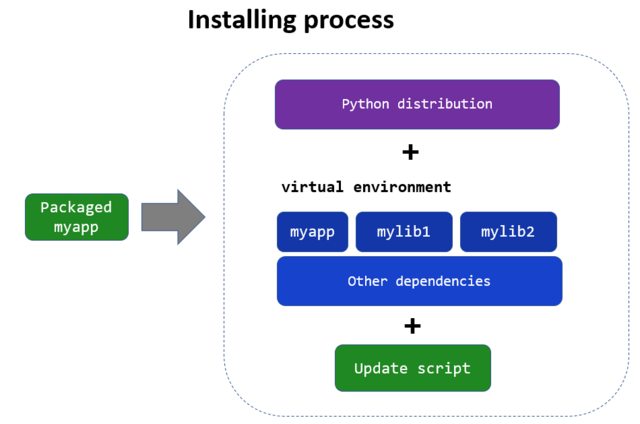 These tools have their own users and use cases. My project is huge with lot's of dependencies and external files to include, and I used numerous hours to get any of them working without any signs of light at the end of the tunnel. Also, updating the app should be easy. Moreover, I want to stick to just running the app with python.exe since everything just works™ out of the box. It would be also easier for me to debug the app if/when anything goes wrong (even though, there is quite heavy logging included).

2) Why not just distribute wheels?

I can not distribute only .whl files, since the end users are not necessarily IT-experts. The app might only work on the CPython distributable I am using (Python 3.7.7 32-bit), and using virtual envs etc. is really too much asked for the end users. Clicking a shortcut is the only thing I can assume they can do for launching the program.

1
Python package similar to checkpoint in R
1
Is there any framework or library for managing “dependencies” of data processing?
0
Software to fix "failed to build wheel for pyzmq while installing jupyter"
0
Python package for an easy-to-script and self-configuring simulator control panel