I have had three problems with Final Cut Pro that beg the question whether it's still fit for purpose of professional videos.

I imported one MTS clip and Final Cut Pro converted it to MOV. In the process, it compressed and mangled the image in a few frames around the eyes of this puppet:

I solved this problem by deleting the clip, drag-and-dropping it in the library (without conversion), and placing it again where it should be.

Another problem was that I added images, say A and B, where B is A plus a halo around one object, and added cross-dissolve transition between them to make it look like the object was glowing. The export from FCPX did not show monotonous transition from A to B and back to A, e.g. the amount of image B going from 0%, 25%, 50%, 75%, and 100% over five frames; instead it was 0%, 50%, 25%, 100%, 75% (or something like it). I solved the problem by deleting all images and transitions and adding them back again.

Finally, I included a clip of a few seconds that I cropped and had to be transcoded. My computer worked overnight at around 200% CPU and the background render still did not complete, it was stuck at 1%: 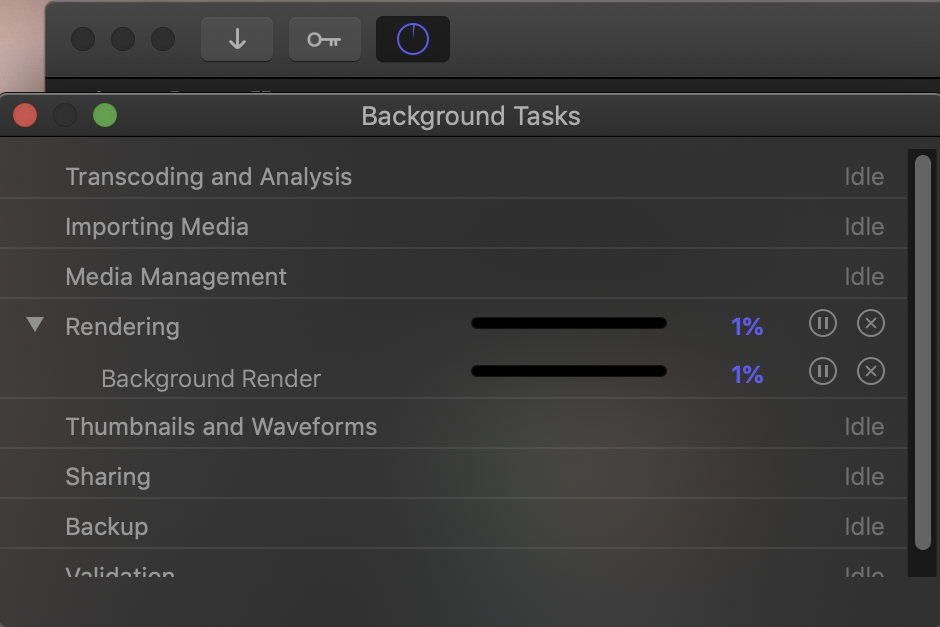 After several days, I decided to delete the clip and add it again, and then the video exported in a few minutes.

These problems were not only annoying and time-consuming; the real issue is the loss of confidence in the output, the many reviews to catch these, and the risk that some may have slipped through.

I remember my film-making teacher a few years ago saying that Final Cut Pro is no longer industry-grade (although it was still what he taught). I installed the latest version last month, 10.4.8, and am on macOS 10.14.6 (Mojave).

Am I unlucky or is Final Cut Pro no longer industry-grade? What alternatives exist to it?

Browse other questions tagged video video-editing or ask your own question.

3
Free video cutter and joiner tool for windows
6
What Windows software can I use to tell which codecs are used in a video?
21
Simple program to cut videos without ANY loss of quality for Windows, Linux or Android
0
Convert Programm, where I can cut now and convert later
7
Video editing software for occasional use
1
Simple video editing software for my stop motion projects
0
Cut video into multiple short videos
4
Well working video editor for Linux with proper feature palette
1
How to recover video from scratched DVDs