What app for visually representing ideas & sections of a book?

I've always found Word processors very poorly adapted for organising ideas, which quickly become scattered across many separate pages. Trello allows to edit and move around ideas right on the screen but it's limited because it's not designed to that end.

Any idea what app could do the trick better?

Specifically: what app allows to represent visually and organise ideas with a view to write a book for instance, or a series of videos/lectures? This app would offer a way to build a global, visual representation of all the ideas and sections.

The app should run on Windows (10), I don't mind paying if it's not too expensive. I have no particular features in mind except the ability to create and move around ideas/sections on the screen. Mindmap isn't enough I think because for each idea/section I'd need the ability to add content into it like with Trello cards, and that content would only become visible when clicking on an idea/section.

windows writing
Share
Improve this question
edited May 1 '20 at 18:44

Maybe some outlining editor is what you're looking for. I like the Workflowy.

I use WriteItNow. It is mainly designed for writing novels, I think. It has an area for listing your characters, chapters, events, places, ideas, references, submissions, props, etc. and, when you click on any of them, the one you clicked on is loaded into an editing window where you can write content for that item. I don't know if it will lend itself well to your need, but you can find it at this URL if you would like to take a look at it: https://www.ravensheadservices.com/index.html

I was also thinking that Warnier-Orr diagramming might support what you are wanting to do, but the software that I know of for doing Warnier-Orr diagramming with a computer is from a now-defunct company. It was from TLA systems and it was called, "Brackets.exe" or "{.exe." It uses brackets to associate ideas under parent ideas and it represented logical flow between those ideas. It ran on DOS. It had the ability to generate source code in both COBOL and C for generating computer programs. I used it a lot in my programming job way back when. Here are a couple of screen captures from Brackets that I took just now while running it under DOSbox on my Ubuntu computer. 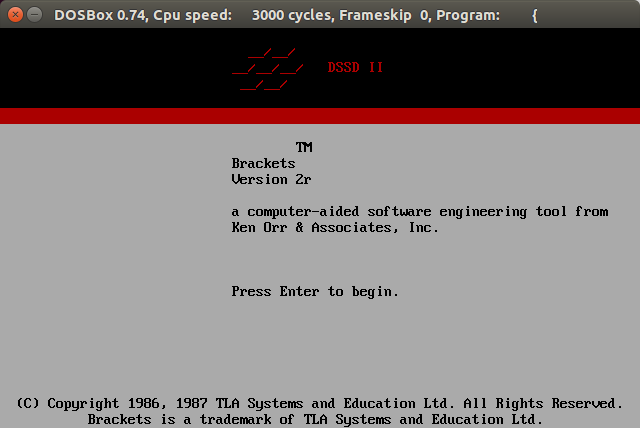 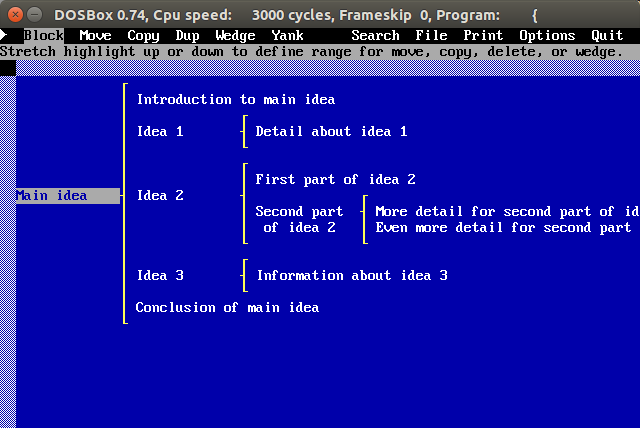 I also was thinking that any of the image processing programs that support image layers might lend themselves to arranging ideas and moving them around. I use GIMP on linux. If I put each idea into a graphic on its own layer, I can move them around and print them together as one image, showing their relations to each other.

Beyond these three, I don't know of any software that does specifically what you described. If anything comes to mind, I will return here and post again for your benefit (potential benefit, anyway.)

We always did idea organizing on a whiteboard in a conference meeting. Maybe software that is used for teleconferencing might do what you want to do. We used to have conferences that were set up by software companies and we would each sign in to a web site with a specially assigned invitation ID and the conference would appear on our desktops. I don't know what software they were using. I wish I could be of more help than this.

Not the answer you're looking for? Browse other questions tagged windows writing or ask your own question.

14
Software for managing the writing of a book
14
Find visually similar images for a given image file (on Windows)
3
Looking fo a free type specimen book creator for Windows
3
Infinite canvas for taking notes and recording ideas in a freeform way
1
Software for Windows for organization of ideas
1
How to determine what exact color an app is using?
0
I am looking for software to write a quite big and complex book
1
Any app to know what an app is doing, checking, creating, and etc.?