Is there any app that keeps track of time spent on iPad?

I would like to know if there is an app you can download from the Apple app store which can keep track of the time spent on each app. I am also curious to know on more control apps (from Apple app pstore), for instance is there an app that can block some other apps for a limited amount of time?

This is currently not possible without jailbreaking the device.

If you're jailbroken, you can use App Analytics. This app tracks how long an app is active for, as well as the number of times the app has been launched and when the last time the app was opened. The app also lets you narrow down the results on a monthly basis. 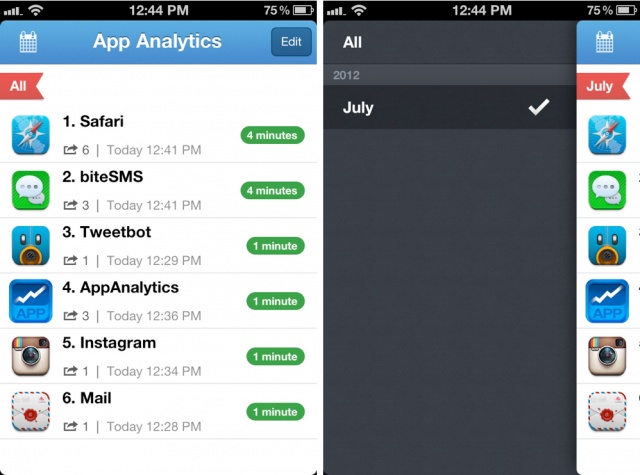 iOS 12 introduces a new feature called Screen Time which does exactly this.

With Screen Time, you can see how often you pick up your iOS device, which apps you're using, which apps are sending the most notifications, and other details.

This new feature will also allow you to block some apps for a limited amount of time.

In the Screen Time section, you can set scheduled Downtime for yourself to restrict yourself (or a child) from using apps outside of those that have been allowed with App Limits, you can set specific time limits on app categories like social networking or games, and you can access Content & Privacy Restrictions, useful if you're managing a child's device.

13
iPad - "user rights" app
5
Mobile apps to track how much time a user spend using different apps on a mobile phone
2
Activities manager software
1
App lock for iPad Mini
0
A website-and-app tracking service that can be freely categorized?
0
Is there an Android app with a calendar and the ability to drag and resize like toggl but that doesn't have a time-limitation in what it shows?