Video player with backward frame by frame stepping for Linux

For analyzing videos, I am looking for a Linux tool to browse through frames one by one, both forward and backward in time.

I am currently using MPlayer for studying these videos, using . to step frame by frame. However, I cannot step through frames one-by-one backward in time.

Therefore, I am looking for a video-player that meets all of the following requirements:

I've read on some websites that VLC player or SMPlayer might be able to do this, but I could not confirm it in official resources, and rather not take the time to install a tool which in the end does not have the right features after all.

With VLC you can slow down the file, but it isn't really frame-by-frame. OpenShot is a pretty lightweight (and very useful) video editor, which can show frame-by-frame.

You can use the left and right arrows to navigate frame-by-frame backwards or forwards in time.

You can also get a live DVD (or USB) with it on here: http://www.bandshed.net/AVLinux.html

Development of mplayer has stopped (edit: resumed) and you should consider replacing it with mpv which supports this feature. Framestep forward with . and backwards with ,.

VLC has an extension called Previous Frame for frame-stepping backwards.

Extension Installation: Put the file in the VLC subdir /lua/extensions, by default:

(create directories if they don't exist)

Then you simply use the extension by going to the "View" menu and selecting it. 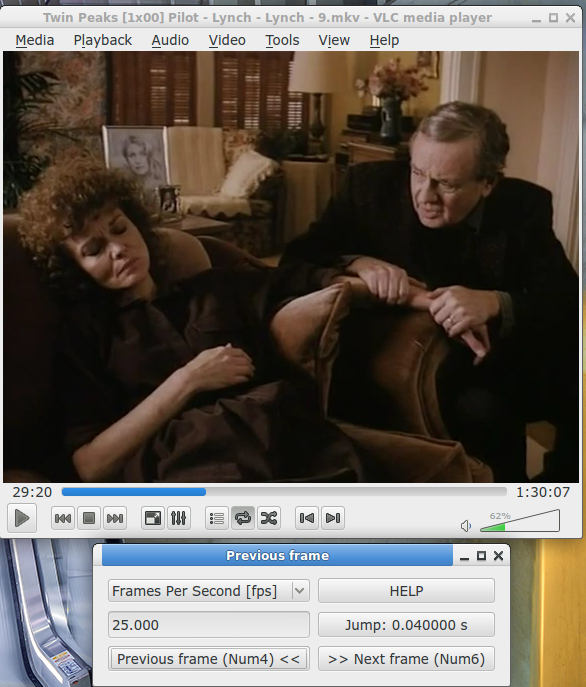 avidemux can do this. It's in rpmfusion free for Fedora and there's a PPA for Ubuntu.

It supports most codecs and containers, and can step forward/back frame by frame, and properly switch between forward/back without needing to skip. It will also seek in containers that normally don't support it, like MPEG-TS. It's able to do this by building an index file when it first loads a video.

Avidemux has the ability to export a single frame. Unfortunately, it does lack slow motion play, and doesn't have a very useful zoom.

Totem has frame forward/back keys (. and ,), but it doesn't work correctly and will, seemingly at random, go backwards instead of forward, jump to the beginning of the file, jump to a keyframe, or lock up. But it can do screenshots.

As detailed in this answer on askubuntu, SMPlayer can do it when using "mpv" as it's "Multimedia engine" (under Options -> Preferences, at the top of the "General" tab).

The default keyboard shortcuts are , (comma) and . (dot) for back and forward by 1 frame.

It seems to work fine, it's fast and smooth in both directions.

Not the answer you're looking for? Browse other questions tagged linux gratis video or ask your own question.

4
What video player will speed up, slow down, & play backwards on the fly?

15
Media Player Classic alike on Linux?
7
Movie player where volume can be increased over 100%
0
Graphics tool for extracting snapshots from a video for Linux
4
How to quickly watch security camera video clips?
2
Mini video player for Windows
2
What software can I use to extract motion from a video file?
0
Video player for GNU Linux
0
Video/Audio Processing:Adding Second Language Sound To 4k video Through Vlc player Result Into Shaky Sound & Video