I'm currently on macOS and I will be moving to Windows soon, and one of the ways to quickly excess extended characters is by pressing and holding a key, e.g. 'a' and the following popover appears (see image below). Is there a native way to do this this intuitively on Windows? If not, is there any third party software capable of providing a similar functionality? Thanks in advance!

I don't know of a direct replacement for the Apple structure, but you can achieve something vaguely similar if you set your keyboard layout to one of the English International layouts.

International layouts use a dead-key system, rather than a pop-up. The Mac used to use a similar system by default, before the popup was transitioned from iOS to macOS. I don't know whether you're familiar with this, but the structure is to hold Opt then an 'accent' key, then type the letter you want the accent over - so Opt e followed by a gives á Opt u followed by o gives ö etc. The orange keys become dead keys with Opt held...

The Windows International layouts give a similar kind of replacement - except you don't press Opt [Alt], you just hit the dead key followed by your letter [or by spacebar to use just the 'dead' character.]
I can't add a picture for the Windows keymap as there's no equivalent to show which are dead keys. 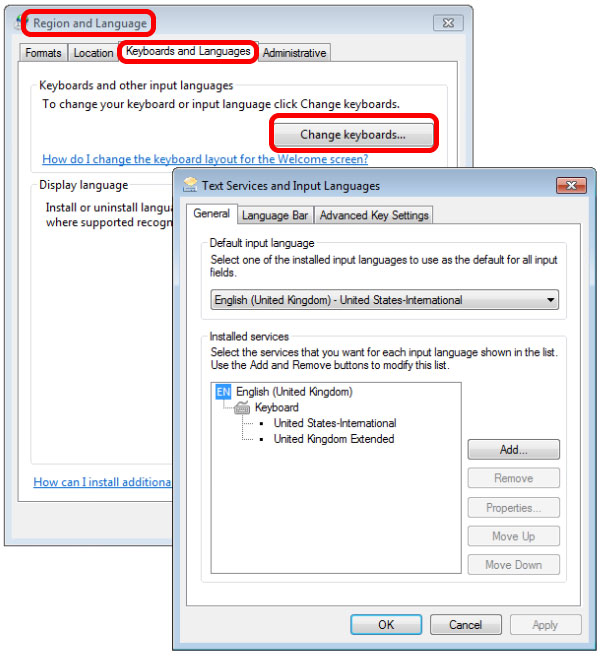 Here I have first set my Language to the correct one for my physical keyboard & Location (English UK), then underneath I have a switch between US International (with the dead-keys) & 'standard' UK Extended (without dead-keys).
The switch between US & UK is because it also moves the locations of @ and " which clash with my usual Mac keyboard layout which I'm most accustomed to.

Not the answer you're looking for? Browse other questions tagged windows-10 productivity macos accessibility utility or ask your own question.

0
Move and resize windows while holding keys down
1
MacOS for Beginners - Which Tools to Install?
1
Is their an official macOS download for virtual machines?
1
MacOS utility similar to Vim's Leader
1
MacOS virtual output device