The purpose is NOT to detect plagiarism, as some tools I've found do. The purpose is to automatically detect whether a cosmetic change to the source code is really purely cosmetic, i.e. whether it changes something other than formatting, comments or variable names (or other identifiers). Obviously a regular text diff tool can't efficiently help here; this needs a language-specific tool.

Preferably, if the tool finds a difference, it should indicate it and then continue analysis, so that I can evaluate myself whether that constitutes a cosmetic change or not (e.g. int i; for (i ...) -> for (int i ...)). I'm not asking for these kinds of changes to be automatically detected and ignored by the tool; it would be cool but it's not a requisite.

One possibility I have thought of, is to use a source minifier and compare the minified versions, but I haven't found a C++ minifier that is also able to deal with local identifiers.

That could be a research project, or at least a work for a Master's degree dissertation (and probably gets you a PhD). I guess that your ill-defined problem falls into Rice's theorem so is undecidable.

At last, the preprocessor is by itself capable of fancy things and usually used that way. Many warning or logging macros involve __FILE__ and __LINE__ or __COUNT__ (see this example and explain how would you want it -or __TIME__[0] deeply hidden in some other macro- to be handled). Think also of x-macros, a very common practice in real C or C++ programs. Be also aware of Qt's qDebug macro for debugging and its moc (and explain how that should be handled). And what about C++ template expansions (they are Turing-complete at compile-time; think of a small change inside a template definition or inside an inlined method), so adding a single namespace or using or #include line alter the semantics of the entire translation unit, notably thousands of lines below. Because of g++ -DWITHCARE=1 invocation on source code having #if WITHCARE, the same C++ file (compiled with and without -DWITHCARE=1; think of some Makefile rule, or of GNU autoconf) can have very different meaning.

You could compare the machine code sections of generated .o ELF files, after having enabled compiler optimizations.

One possibility I have thought of, is to use a source minifier and compare the minified versions,

The GCC C++ front-end (if you invoke g++ that front-end is inside cc1plus) could be considered as a minifier. It produces GCC internal representations (such as GENERIC and GIMPLE). You might consider a GCC plugin approach and compare the GIMPLE representations. But even that is not trivial to implement.

Don't forget that C++ files could be generated (with tools like SWIG, bison, Qt moc, simple shell scripts or Makefile rules, or programs like my bismon or my old GCC MELT) and such generated files might be further #include-d. And such practices are very common (e.g. the GCC compiler has dozen of generators emitting C++ code, and IIRC so does firefox or libreoffice).

You might consider using static source code analysis tools à la Frama-C (e.g. develop your own Frama-C plugin for Frama-C++) or build something above Clang.

In principle, my Bismon tool should be able to to what you want at end of 2020. But it is a research project (with an obligation of means not of results).

You may want to read my draft report (explaining what surprising optimizations GCC is capable of).

if the tool finds a difference, it should indicate it and then continue analysis, so that I can evaluate myself whether that constitutes a cosmetic change or not (e.g. int i; for (i ...) -> for (int i ...)).

I strongly recommend looking with care into the source code of several existing C++ free software programs (e.g. on github or inside a Linux distribution). You'll find out how coding practices differ!

NB. The real question is: can you pay a million euros (or US$) to achieve your goals and get such a tool? (or at least 300k€). If yes, I am professionally interested, contact me at basile.starynkevitch@cea.fr; thanks.

I don’t think that you will get a better open source application than WinMerge (although it would do no harm to look at Kdiff3. 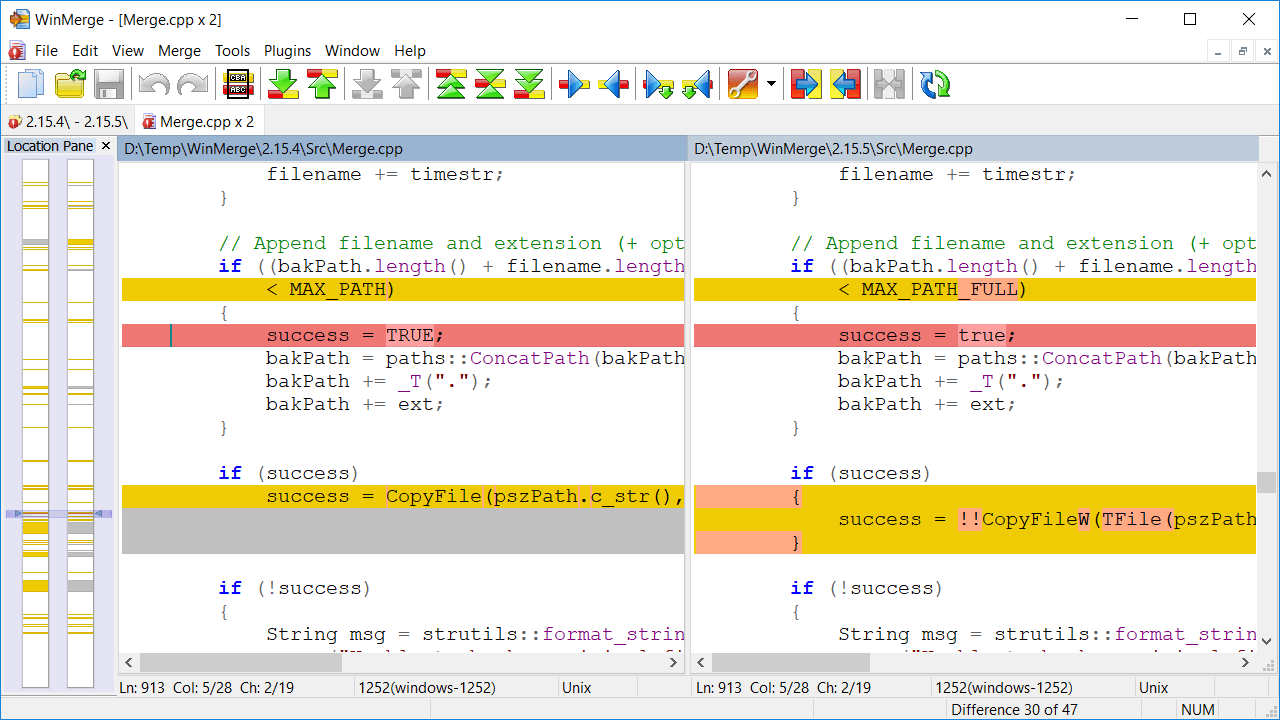 Not the answer you're looking for? Browse other questions tagged open-source c++ comparison or ask your own question.