Mock-up or prototype tool with HTML/CSS import AND export

I have looked high and low for a mockup tool (aka: prototyping and UX) with the ability to import raw html or a website URL and have come up dry. So far I found dozens of these programs, both offline and cloud based, but not one boasts the feature I am looking for.

Several of the ones I demoed have the ability to export to html with supported css and some can also export assets such as images. The closest I have tried is called JustInMind. However, their implementation of importing html is as a widget, which is nothing more than a textbox with a tiny html properties window where you can paste html. 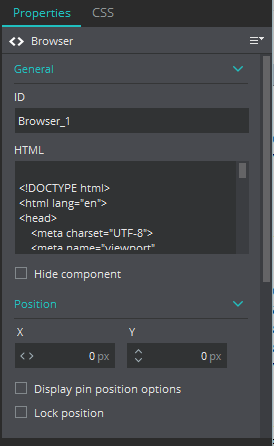 I believe it was designed for adding small snippets of html, not entire websites.

Perhaps someone has an idea, such as "use this tool which has a plugin that does what you need", or a procedure like save website to a single html file, convert to a different format then open with this mockup tool.

I'm desperate here. All the mockup tools I have seen so far are like baking a cake, then not getting to eat it.

Edit: Allow me to elaborate further. What do some of you other graphic design shops do with mockups once your client has approved the design? Do you hand a PNG or PDF off to development and let them duplicate the effort to mimic the image into html?

What I am after is resources and assets the development team can use that were derived during the design phase, thus mitigating redundant workflow.

I hope this makes sense because production time to develop is constantly being hindered by old-school methods of taking a mockup and having to duplicate the effort twice - once for design, and again during development.

I can't even begin to say how disappointed I was when I found nothing that could export Adobe Xd to Adobe Dreamweaver. You'd think this would be obvious.

Update: I ended up falling in love with Lunacy. This is the Windows alternative of the popular Mac prototyping tool called Sketch. It saves in native .sketch format, which can be opened with both Sketch and Adobe XD. Adobe XD Ran really well, and was less prone to the little glitches you'd sort of expect with a beta/under development program, but it hasn't stopped me from using Lunacy daily. It also has the ability to export CSS code and displays SVG images perfectly! If you landed here in your search for a prototyping tool, check out Lunacy for Windows - oh, and it's free!

15
A tool, or IDE plugin to leverage development of .less (Lean CSS) files, and CSS exporting
12
IDE specifically for layout and design of regular web applications?
1
Web development tool -PHP/CSS/HTML
2
Easy to use HTML/CSS/JS builder for web design/development with minimal coding
1
Which tool to use to design and export a website
7
Visual HTML 5 Editor and Development tool
2
Command-line utility for rendering HTML+CSS to image