I basically need a text editor which displays text in a grid, so that I can know the exact column numbers of the text. The numerical simulation software I am using, TOUGH+ (written in FORTRAN), has a strict format and I need to specify my input files in the exact format. A letter misplaced here and there can make the whole file useless. So I need this to quickly glance at the input files, and know/verify which text starts and ends in which column. Otherwise, the file gets confusing sometimes. For example in the image of the input file snippet, it's very difficult to separate at a glance where one value ends and other starts.

I most useful thing I have tried is the TextFX plugin with Notepad++, but it is very inelegant, as in it just places a text of characters to see the column numbers.

The best way to describe my requirement would be Spredsheet but which takes only one character in a cell.

CudaText editor has features for it: 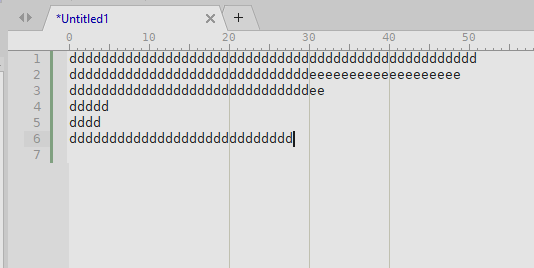 Not the answer you're looking for? Browse other questions tagged text-editor microsoft-excel plain-text notepad++ or ask your own question.

10
Is there any text editor with autocomplete?
12
Free text editor with full column mode support
3
Any cmd text editor which support common text editing shortcuts?
10
A non-WYSIWYG, HTML aware, text editor
3
Text editor in which you can drag and drop text between tabs
2
A text editor which allows texts to be filed under keywords?
6
Which text editor makes writing plug-ins the easiest?
0
Good, free software for candlestick charting (using CSV or text input file)
0
Simple Text Editor in Linux with Conditional Formatting