I'm looking for a Git client that would be very easy to use by non-technical users. I'm not worried about branches, merging, and perhaps even labels.

In a nutshell, simply cloning a remote repo locally and then repeatedly pulling the master is probably all I'm looking for. Maybe committing and pushing, but probably not.

I've been looking for a document management solution that will allow me to maintain and share a set of documents with a small team of other users.

The documents are simply final versions that won't be edited; if there are any future changes for individual documents, they will likely be additional documents placed under control rather than versions placed on top of existing documents, although the latter could be an option.

The documents would usually be PDFs; their source Word or LibreOffice documents might be stored with them as well.

Regarding the users, some of these users are not technical at all. The environments used will likely be Windows, Linux, and Mac depending on the user, though I wouldn't worry about anyone using Linux as native Git should be sufficient.

Edit: Additional thoughts based on the responses so far:

We currently do use Google Drive and Google Docs. It works great for all the features mentioned below regarding collaboration, but I wouldn't trust it to hold the most important documents such as final drafts of policies and procedures, signed contracts, etc. Also I would prefer to have full control of that in a private local Git repository.

It's not so much "publishing" as in typesetting; it's more taking documents that have been signed-off and released and distributing them to the team in a central location (Git central repo) and then letting the remainder of the team get to them, and with Git clones everyone essentially has their own local backup copy in case any one person's hard drive goes belly up.

Also the built-in protections that come with Git are attractive in case files get tampered with.

Version control is great too in case we decide to overlay future document releases on top of existing document versions. I think I remember reading the ownCloud or NextCloud documentation that stated older versions would get dropped depending on how old it is, so I believe that doesn't work for me.

I'm sure SharePoint would work great but I'm looking for something FOSS.

Another benefit could be to use the Git repo for in-work documents as well. Google Docs is great for collaboration, but the word processor and other tools are clearly lacking many basic features that come with Word and LibreOffice, so sometimes it's just easier to get a more-professional looking document written in LibreOffice and sent out as a PDF rather than dealing with the Google Docs hassle.

Of course merging documents would be a nightmare or impossible, so we would have to coordinate who works on what document to avoid such a fiasco like the plague, but I'm not interested in in-work edits just yet.

Free for non-commercial use. Integrates with BitBucket, GitHub and more to make cloning new repos easy.

I wonder though, why don't you just use Google Drive and Google Docs? With that you can even collaborate on content with revisions, and comments. Maybe because this is about "Publishing", typesetting, and some graphic art? Then maybe consider Canva.com

I sometimes use Git Cola. It isn't too fancy, but rather simple – so it should be a good choice for your non-technical users. 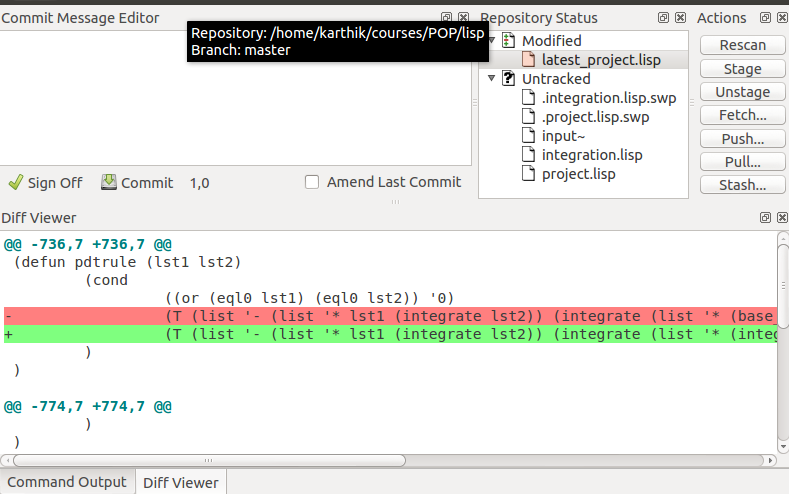 The two buttons you mention to need can be seen in the upper-right corner:

If your users want to provide update, they just need to double-click the changed files in the status frame (to "stage" them; can also be done by marking them and using the "Stage" button), enter a commit message, and push the "Commit" button (followed by "Push").

I didn't mention cloning? Well, when started outside an existing repo, it will ask you to "Clone" (button) or open one of the repos known to it. Pushing the "Clone" button will open an input box to paste the URL into, and there you go. Couldn't be easier. And is available for Linux, Mac and Windows.

For some additional choices, there's a collection on our sister site: Is there a GUI client for Git? [closed] Though they focus on Linux, some of the candidates are available cross-platform.

Not the answer you're looking for? Browse other questions tagged document-management git version-control or ask your own question.

16
What is a good newbie friendly graphical Git client for OS X?
156
What is a good newbie-friendly graphical Git client for Windows?
25
Simple versioning for plain-text documents (Linux)
2
Git for WordPress
0
TFS to Git migration tool
0
standalone git server for a team
1
Git-based source control with unlimited users
2
Word processor that will create text files with embedded images, but store the images outside of the text