How to limit the available bandwidth for specific processes on Windows 8.1 Pro

So, I wish to limit the upload speed of specific applications which lack a built-in control for it and at the same time I'm trying to find a solution that's as organic and long-lasting as possible.

With a bit of searching I found quite a list of opensource bandwidth control software, all of it for linux, and at the same time I'm having trouble finding anything other than free-trial and paywalled-functionality applications for windows, which I do not wish to bother with.

I also stumbled upon some info about it being possible with the use of group policies but not much detail on how to achieve it. The computer runs windows 8.1 pro.

tl;dr: To sum it up, I am trying to limit the maximum upload rate for specific applications by either using opensource software or group policies or by other means, as long as they aren't commercial/demo/free-trial or similar type of software.

A third-party solution is the free ASRock XFast LAN utility distributed by ASRock with its network cards, but which can also be installed for any other network card.

This program has a different approach - it does not limit traffic to a specific speed like do NetBalancer or TMeter. Instead, it prioritizes internet traffic so important programs can have a higher priority. This lets low-priority programs still use the entire bandwidth as long as no higher-priority program is executing. 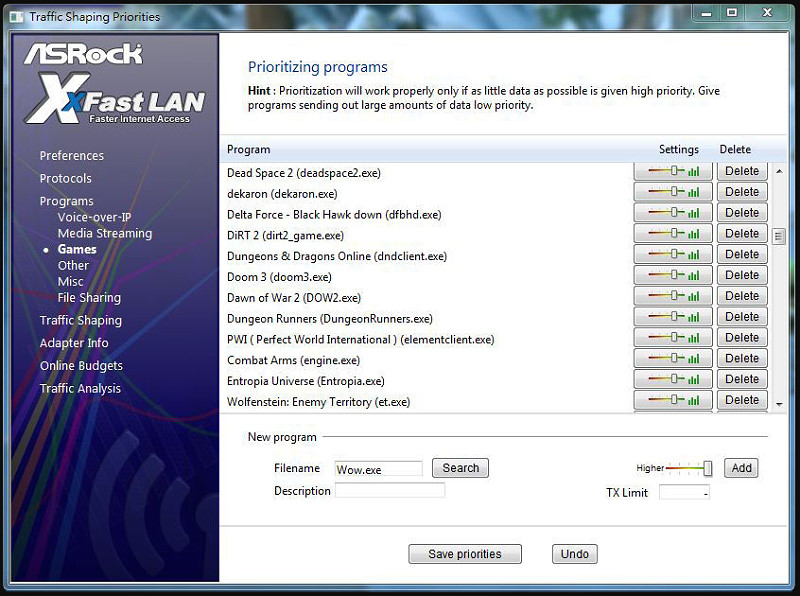 Here is how to install it on a network card that is not from ASRock :

This is a very complete product that allows complex rules and defining pools of executables, with which I have no experience.

For an example of using it, see the article Limit Runaway YouTube Traffic With Sophos UTM QoS.

Windows has a built-in QoS method (Quality of Service), which can be defined via the Group Policy Editor. Strangely enough, it can only throttle outbound uploads from the computer, so is more aimed at being used in servers.

One can create policies with more detailed conditions via the PowerShell New-NetQosPolicy command which is part of the NetQoS commands.

For example, to limit OneDrive.exe to 5,000,000 bps, then update, list and delete the policy, execute the following commands in PowerShell run as Administrator :

Not the answer you're looking for? Browse other questions tagged windows-8 bandwidth open-source or ask your own question.