Is there an IDE which lets me debug DOS batch scripts, setting breakpoints, examining variables and stepping through the script?

... In addition, Take Command is a powerful batch file programming tool, including an integrated IDE with a sophisticated editor and batch debugger. Take Command offers extensions such as DO loops, SWITCH statements, error and exception handling, system monitoring and event triggers, third-party plugins, and more than 690 built-in variables and functions.

You can see the demonstration video here

CMDebug is a stand-alone version of the Take Command IDE and batch debugger component. CMDebug is intended for developers who need to develop batch files to run in CMD (the Windows default command processor) or TCC-RT (the free runtime version of TCC). 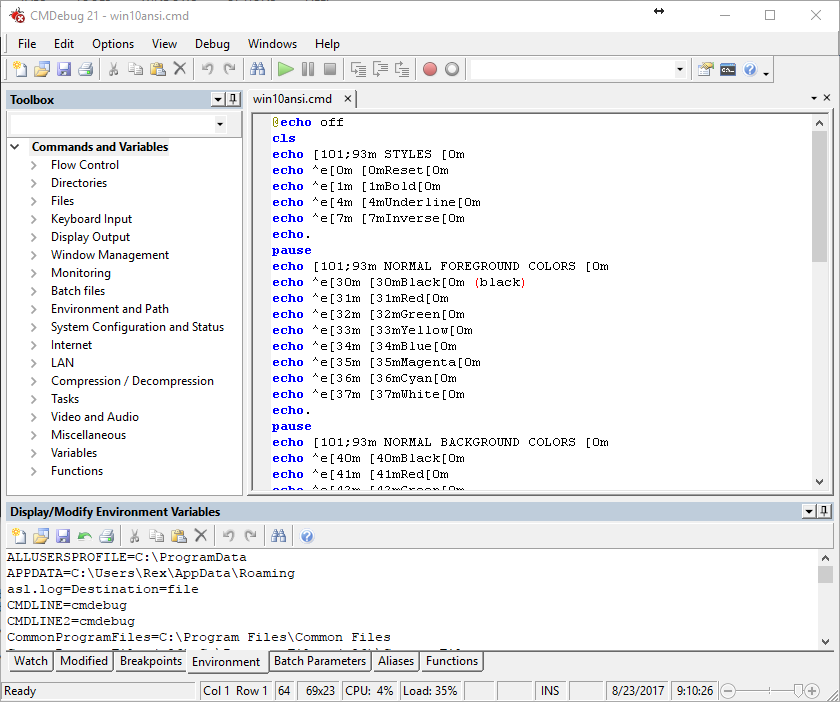 Unfortunately they're not free. You can try them for 30 days though

Running Steps: Because batch file debugging is not easy, you need a tool that will help you pinpoint the source of the bugs quickly. Are your files stopping with a message like 'xyz was unexpected at this time'? Are you spending tens of minutes (even hours) finding and fixing bugs? You don't need to. With 'Running Steps' you will make your batch files more robust and remove bugs in just a fraction of the time. Plus, it will warn you about lines that are prone to fail even if they execute fine on a regular basis. Reasonably priced. Just $79.99.

Sadly the company seems went out of business but you can still download the installer from archive. Like Take Command, it's a 30-day trial software but you can't buy the license anymore

Not the answer you're looking for? Browse other questions tagged windows ide debugging batch or ask your own question.