I would like to know about (zero cost) software for automatically combining a series of pixel-art images of adjacent, overlapping scenes into a single composite image.

OS isn't important. I'll be running it on Win 7 most likely, but I can use others.

These screenshots are from a game called Inherit the Earth. I've recorded the characters walking to the right up and upwards. They've been taken using the Video Capture mode in DOSBox, so I have every frame available to me as a .png sequence.

If I manually combine these together in Photoshop, I get to see more of the scene at once.

What I'd like to do is to take some thousand .pngs taken from a captured video and use software to combine all of them into a single map image of the town.

I've attempted to write a program for this in Python, but my image-comparison step seems to be the bottleneck and it takes hours to produce the following image, and some errors appear to have crept in at the center despite my efforts. 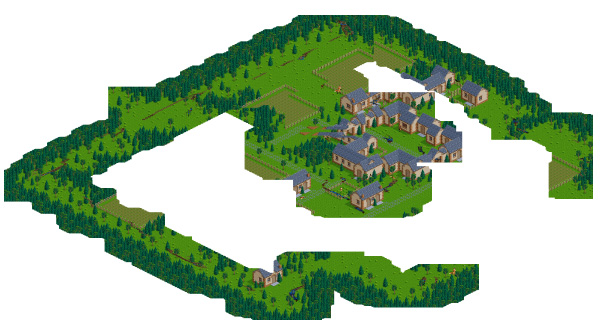 The holes are not because of mis-calibration, I hadn't walked around the entire town yet because it's big. :)

N.B. I'm looking for software to automatically help me do this for other games, not maps specifically for Inherit the Earth.

-- Edit - After many hours of processing and a lot of manual effort, this is the type of result I am hoping to see.

Hugin is an advanced photo stitcher that is normally used for generating panoramas however it should do the job nicely for you. Hugin does support .png files as an input and will normally detect the adjacent frames correctly if there is sufficient detail in the overlap.

For speed of processing I would recommend not using every file of your capture but aim for about 70% overlap steps - this will cut down the number of files drastically and also the processing time.

You will have to guess the field of view and may need to add some control points manually.

I'm testing Image Composite Editor by Microsoft Research, though it's slow, and the background tiles of the ingame map are so similar to one another that it gets confused very easily. Trying to pass it nine hundred 320x136 images simultaneously results in prohibitive multi-hour processing times, unfortunately.

Not the answer you're looking for? Browse other questions tagged gratis images image-processing pixel-graphics or ask your own question.