Windows PC as a bluetooth gamepad

I want to use a gamepad via bluetooth, but I only have a wired Xbox 360 controller. Is there some kind of software I can use to turn my Windows PC into a bluetooth gamepad? I.e. pair a mobile device to my PC and have it send the button presses from the PC to the mobile device over bluetooth.

Note: I have found no solution to use the PC as a bluetooth game pad. This is all workarounds.

Streaming games from Android to PC

Ignoring those that require special hardware, and looking for one with gamepad support leaves us with almost nothing...

However, there is one that can do a workaround: Wondershare MobileGo. Now, it will not present itself as a gamepad to your android device... instead it will allow you to create touch input for a virtual (on screen) gamepad. You can configure the positions for touch input 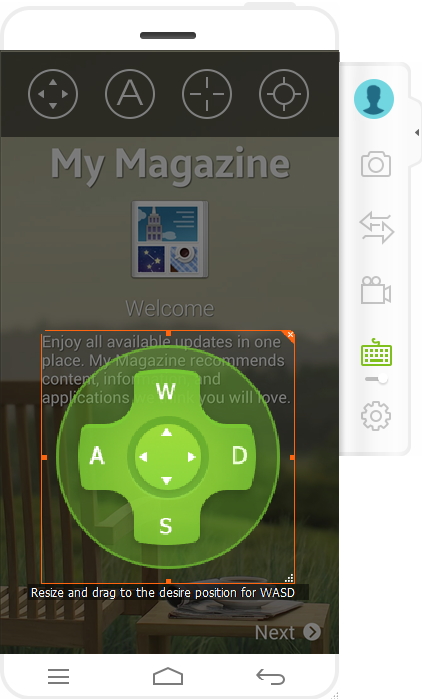 I have two alternatives to take gamepad input and turn it into keyboard input for your PC:

Emulating Android on your PC

If you want to play an Android game, you could be able to emulate Android on your PC and play there.

I have a few alternatives for doing that:

Remember that you can use the solutions from the section above to use your gamepad as keyboard.

Streaming games from Xbox to PC

The Xbox app has a stream function that will connect to your Xbox One or Xbox 360 on the LAN, and allow you to play on the PC with whatever input devices you have. You will find it on the console icon, second from the bottom on the bar on the left.

I still found no solution for the original request, but I found a workaround that works even better for my situation.

Turns out all I needed was a USB OTG cable, which allows me to connect USB type A cables (i.e. "normal USB cables") to my mobile device. With this I can connect a wired gamepad to my device. Apparently newer devices usually have the necessary drivers already installed, so it's just plug and play.

Here's a page with more info on that.

Be sure the connector you buy is OTG. I bought another micro USB type B <-> USB type A connector at first, which didn't work. A shop assistant later explained that it does work with mice and keyboards but not with gamepads or USB sticks. And of course make sure that you choose the correct type of USB for your device (the older micro USB vs. the new USB C).

Not the answer you're looking for? Browse other questions tagged windows bluetooth or ask your own question.

43
What can tell me that I'm probably out of garbage bags?
2
Looking for a software that enables bluetooth packet captures in windows
3
Wireshark-like software for capturing Bluetooth communication data?
1
Free software for CSR Bluetooth usb dongle on Windows 7
1
Monitor bluetooth commands sent by my laptop