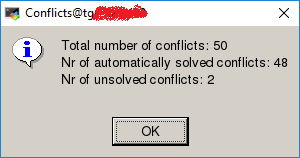 If you are open to learning how to use Emacs or Vim, they offer exactly what you want thanks to ediff and vimdiff respectively:

They aren't running any algorithms: Git does the job. They simply are interfaces making it nicer to resolve the conflict.

To use ediff, open your file in Emacs and run smerge-ediff or set Emacs to launch it automatically. See this Emacs Stack Exchange answer for an image of the interface and details of the keybindings. An alternative is to install the magit package which uses ediff though magit-ediff.

To use vimdiff, you can set it as your merge tools in Git config. The interface is quite similar.