I'm working on an open-source embedded project which requires quite a lot of configuration - distortos - object-oriented C++ RTOS for microcontrollers. When starting a new project you can select the chip you will be targeting from several hundred supported devices, after that you may select the configuration of chip's clock (PLL multipliers, dividers, quartz crystal frequency, ...) and chip's peripherals (whether to enable serial port 1, serial port 2, serial port 5 and so on). During project's evolution you can configure other features of the RTOS (like sizes of stacks, run-time checking and so on).

At this moment the project uses kconfig-frontends, which is a tool used to configure Linux kernel - extracted to be a separate, standalone project. My configuration menus currently look more or less like this: 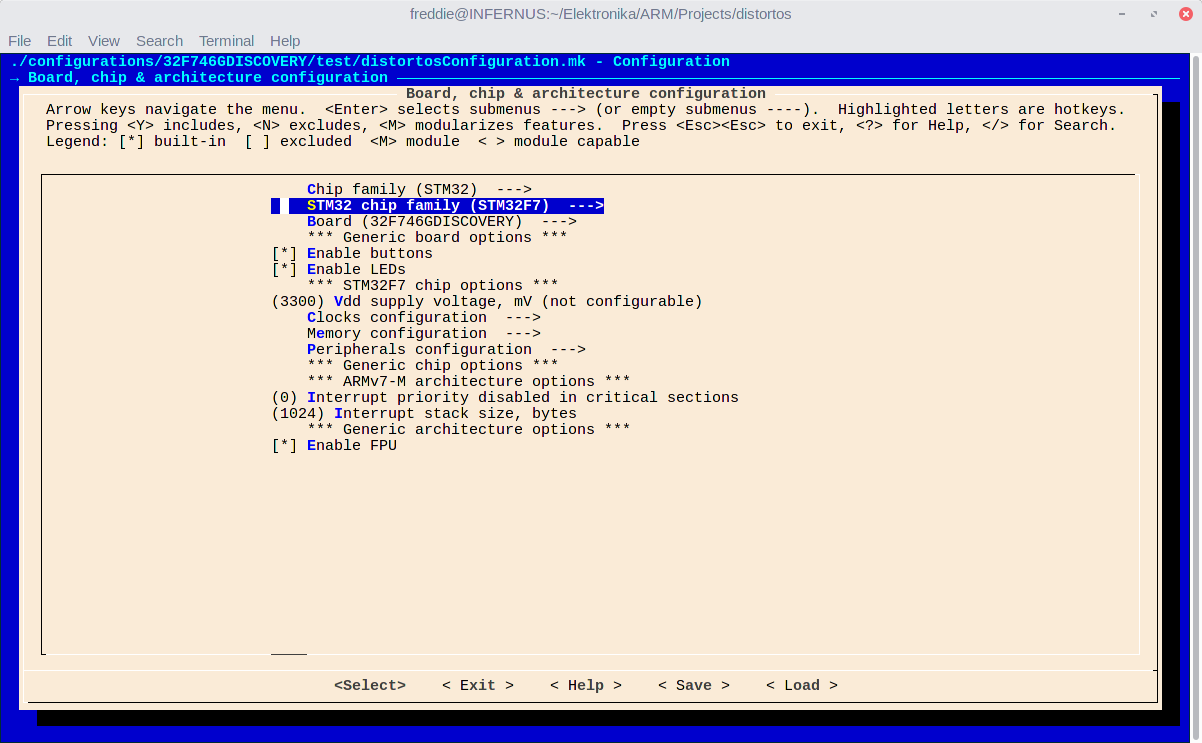 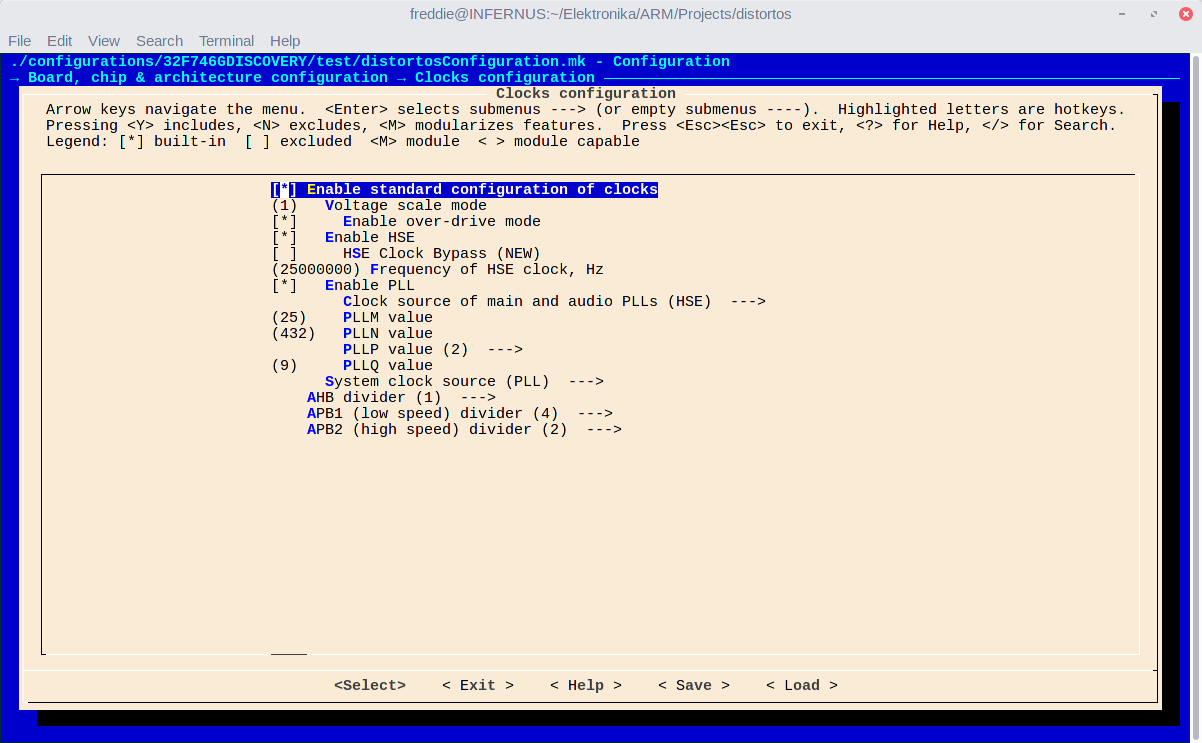 While kconfig-frontends has quite a lot of nice features, it also has some very serious flaws.

Mainly because of first three items I'm considering moving to some other tool. But the problem here is that I actually only know one alternative - cmake-gui (or ccmake). It nicely solves the most important problems listed above (1-3), but doesn't solve all of them - I'm pretty sure points 4-6 remain in place, maybe affecting some different areas, but still... There are also some more issues with cmake:

One user of my project created a preliminaty port to cmake and it looks like that: 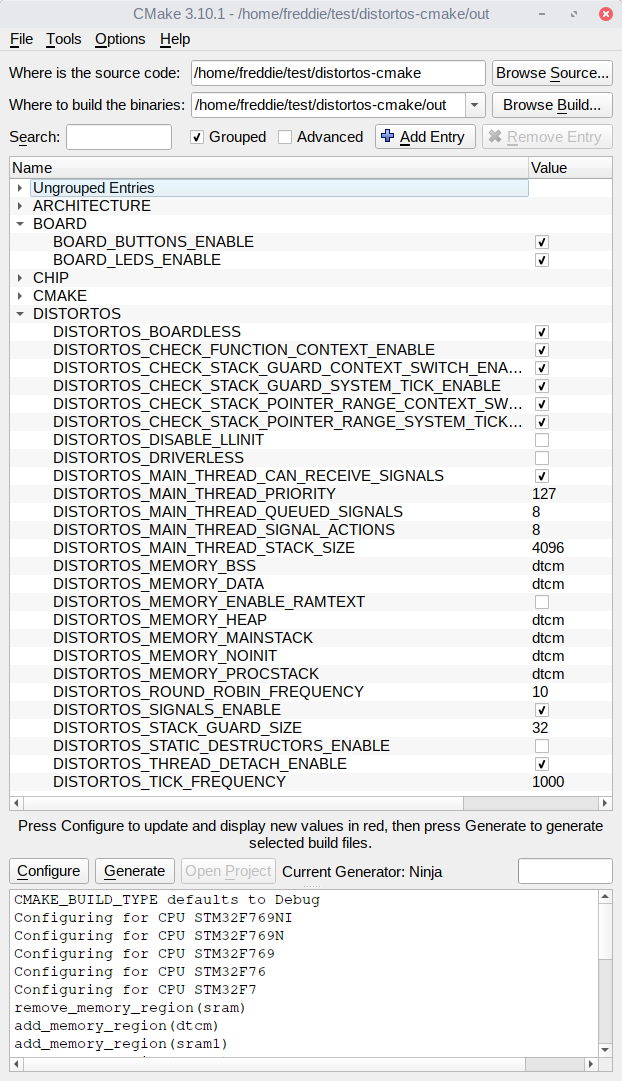 My question therefore is - are there any other alternatives to kconfig-frontends and cmake-gui? The most important features I'm after are:

For other features I'm flexible and I may adapt.

I also know that I could write my own configuration tool and ship that with the project, but I'd really prefer not to go that way, unless forced by lack of other options. I prefer to have some GUI tool instead of a typical approach of embedded project - requiring the user to manually edit some header files with all the options. This is because there are way too many things to configure (even though I try to keep the number of options down to a minimum), most of options depending on some other options, and also because some of the options affect the build process, so using .h file for that is not very convenient.

I am just researching the same issue (need a portable configuration option handing tool with UI), and found the Kconfiglib project. It is a kconfig implementation written in python, support console and graphical UI. Please see: https://github.com/ulfalizer/Kconfiglib

(I am in an early phase and did not checked the tool yet. Some may still find Kconfiglib useful.)

Not the answer you're looking for? Browse other questions tagged gui project-management embedded-systems or ask your own question.

3
GUI to Postfix configuration
1
Gratis web based project management and CRM tools for Electronics PCB/CAD design industry
6
GUI-based file search utility, (with Arch Linux package)
2
With what tools can I make a complex and advanced GUI with Ruby?