repeatedly save picture of previously defined region directly to file

I'm searching for a screen capturing software for Windows which allows me to capture a defined region of my screen over and over again by pressing hotkeys (or timed intervals would work too) while running in the background.

I've tried several different apps like snapper or fscapture but they either don't allow the selection of a region or I have to define that region for each screenshot or the software opens the captured picture in some way and I need to close that window again, which I want to avoid.

What you are looking for is Greenshot: 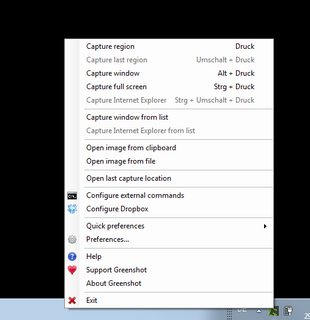 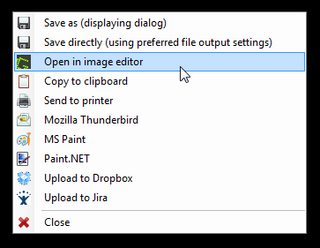 As the screenshots show, you get some bonuses on top of that – e.g. hotkeys for other types of screenshots (window, full screen etc.). Also, once you created a screenshot, a popup menu will ask you what to do with it. For your screenshot sequences you'll probably chose "Save directly" (in which case it will be saved to your default/last location, using the program name and a timestamp as file name). But you can also copy it to the clipboard or even open it in an editor, e.g. for annotations and highlights.

Greenshot is completely free. Many companies have it installed on their desktops by default (in fact, almost any company I worked for here) – and I'm pretty much satisfied with it. Were it not preinstalled, I'd see to fix that gap (they even have a portable version – very useful in a company that doesn't let you install software). In short: I warmly recommend it!

Not the answer you're looking for? Browse other questions tagged windows screenshot or ask your own question.

15
Document scanning software with OCR that takes advantage of multiple CPUs
0
Converting table to picture directly
1
Tool to maximize Google Chrome (or any software) and not allow it to be minimzed
4
PNG viewer that displays alpha channel as transparent
0
Clipboard manager or other utility which will copy the text from a defined region on the screen each time
5
Best software for recording GIFs screen captures with good quality and low sizes for forums
0
Capture screen in Linux, similar to PickPic
3
Free image viewer on windows with zero data collecting policy