In Win7 I used to use Dexpot for this, and was really happy with it. But it doesn't work well in Win10, so I tried using the Virtual Desktop feature that's built into Windows now, and was disappointed to find that there's no taskbar pager included. For reference, the taskbar pager in Dexpot looks like this (found in Google Images): 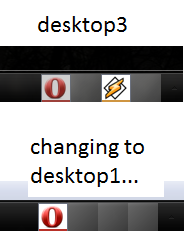 Considering the basics of virtual desktops are already there in Win10, I'd like an app that just provides a taskbar pager that works with those.

But I'd also accept a full-blown virtual desktop app, if it works very similarly to Dexpot (and to the KDE&GNOME pager applets from Linux, which Dexpot works like).

I'm using VirtuaWin with the KvasdoPager module now. It doesn't integrate with the native Windows 10 virtual desktops, but it's very close to Dexpot.

Not the answer you're looking for? Browse other questions tagged windows-10 virtual-desktop or ask your own question.