I'm looking for an easy to use panorama stitcher for Linux that doesn't have too many dependencies.

I've tried Hugin, but it failed me: often didn't even match the images – and even if I added a bunch of control points manually, generating a useful result image was a mess and much too complicated. Photos taken with a smartphone often lack the lens information Hugin wants to know before loading, and I've got no idea where to get those details from (guess that's the main issue here for me, which then cuases the "bad results").

The one built-in to Gimp (formerly distributed separately as "Pandora") can only be used for real simple things, and otherwise fails e.g. with the perspective.

Took a look at fotoxx – but that wanted to first index all my images, which I do not want (what for, if I only want to create one panorama? I don't want the stitcher to manage my entire collection).

I'm currently using Linux Mint Cinnamon, so please no KDE apps (I don't want to draw in half of the KDE desktop just for this task). Being in the standard repositories (or even a PPA) would be a big plus. Should be free (as in "free speach" and "free beer").

Not an exact match, but a substitute that does the job for photos I've created with my Android smartphone anyway:

Bimostitch Panorama Stitcher matches all my requirements (except for the OS). 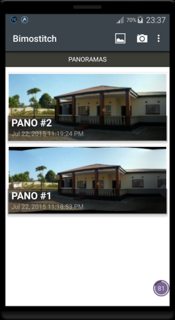 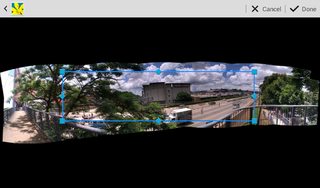 What I haven't yet tried is what the second screenshot shows: instead of running Bomostitch on "full automatics", you also can have it show you a preview where you can adjust things. And of course you can play with the settings – to e.g. chose the maximum image resolution, whether original images should be deleted after processing, and more.

I've not used it much yet (as indicated, I only need such a software occasionally) – but what I needed it for now it processed just fine.

I have always had excellent results from Hugin so suspect what you need to do is to address the lens information from your smartphone(s) and add that to the images.

Finding the lens information for a given smartphone, assuming that it is one that fails to include the information, is for most smartphones simply a matter of going to the manufacturers web site &/or your user manual.

The other issue is training yourself in how to take photographs that are suitable for stitching together.

Not the answer you're looking for? Browse other questions tagged linux image-processing image-editor or ask your own question.