I'm in the planning process for a java based application that is used for live streaming/trading of stock/forex etc. charts. However I am not sure which charting library is the right one for the job.

Basically the charting functionality should be the same as in any trading software, such as:

** could also be done by creating a new chart each time a user action is done instead of letting the chart library do the work - however only viable if it is fast, see performance requirements.

*** Nice but not mandatory.

To make it clear - I am not searching for some magic library that does it all for me. I have no problem with writing code to get my full feature set. But some features can only reliably be implemented by the library itself (such as transforming chart coordinates from a mouse click to the right data points, because those coordinates are dependent on the size of the x and y labels, meaning guesstimating would be a bad approach), other features, when added, must still be fast enough. Depending on the library, this may not be possible.

Performance is a key factor. I have done most of this coding in python already, using matplotlib. However the more candles on the chart, the slower it gets, to a point where using multiple charts with enough data on each chart makes updates in millisecond intervals impossible in real time, despite long efforts to optimize the code. In addition, that code is restricted to one core(thanks to python GIL), no matter how many charts. So its understandable that I am desperately looking for a speedy solution and switched to java. So lets say having open 10 charts at the same time, with a few hundred OHLC data points, all updating at once should not cause a major impact in performance, barely noticeable to the human eye. This is something that can be done using java, as various commercial projects show (Oanda and Dukascopy java clients for example).

The question is, which library is up for the task? jFreeChart? JavaFX charting directly? Other options?

Does anyone know what libraries commercial projects use?

If you want a web app solution written in pure Java but automagically rendered in a web browser with HTML5 web standards technologies, I suggest looking at the Vaadin Framework (open-source, free-of-cost) plus the Vaadin Charts add-on (commercial).

The Vaadin Charts add-on is a Java wrapper (to be invoked server-side) wrapping the HighCharts library built in JavaScript (used client-side in rendering the chart, but transparently to the Java programmer). So most anything HighCharts via JavaScript can do so can Vaadin Charts do via Java calls. Y

With Vaadin Charts, you get the best of both worlds: (a) all the power of Java and its many libraries, JDBC, static typing, speed, reliability, and such, along with (b) high-performance drawing of the chart within the browser locally using JavaScript.

I do not know if Vaadin Charts meets all your needs, but it does provide Candlestick charts and OHLC charts.

Vaadin has built-in support for Push technology, so your charts can be automatically updated in the web browser without user-promoting.

With JavaScript approach, as web content in your Java app, you can add LightningChart JS. It's been made with WebGL, and performance is magnitudes faster when comparing to Java or other JavaScript charts. LightningChart can render up to 100 million data points in real-time. 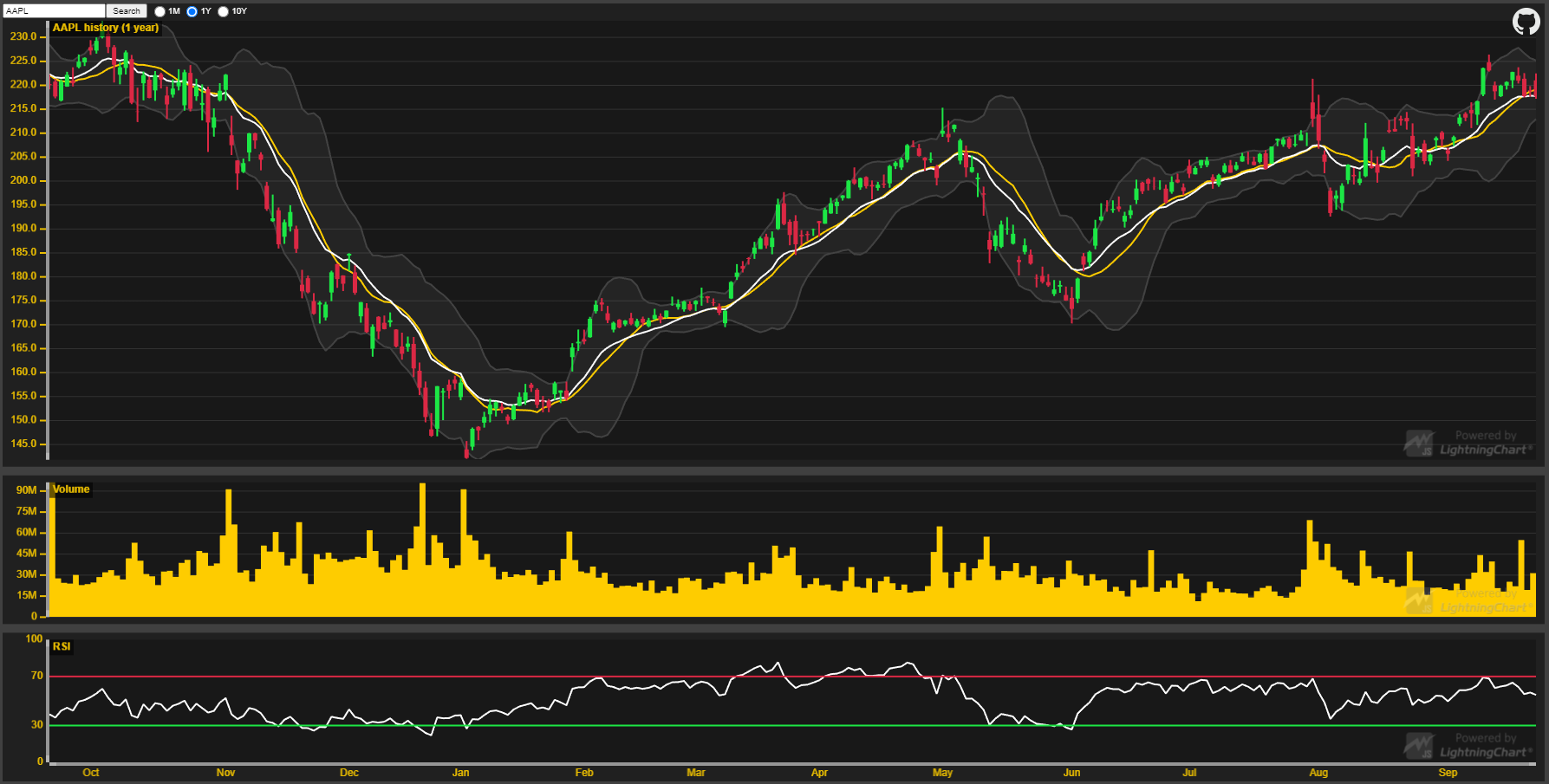