I spent over an hour trying over a dozen Android alarm clocks, but none met my simple needs:

Besides the corollaries to the above, what I don't want:

Gratis is preferred, but not required. Any price is fine.

Timely would be the obvious choice, but recent reviews indicate it may no longer be reliable. As of this posting, it has not been updated in over 2 years. That's too bad, because it is truly beautiful.

With your edit, it seems like AlarmDroid is a good candidate. I've used it for years (until my home-automation took over my stereo for that purpose):

What you didn't ask for: Well maintained and regularly updated (at least while I used it; right now, the last update is 6 month old). The only issue I had with it is that sometimes those updates broke the "talking clock" – but never any other feature. 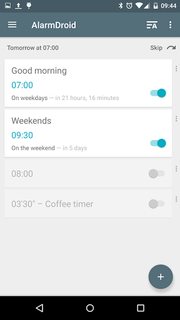 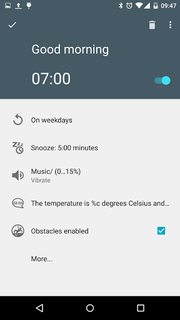 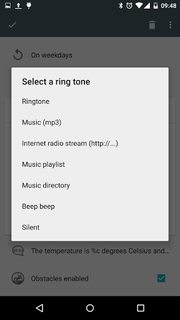 Now for your NoGos:

PS: For an alternative, take a look at Alarm Clock for Heavy Sleepers (known as AMDroid before it got renamed). Quite similar feature set, with the addition of calendar integration (so your "weekday alarm" wouldn't fire on Easter monday, for example).

Sleep for Android is good _ I can't remember if I paid for it, but if I did it wouldn't have been much.

This has your main wishes, but also the maths puzzle (and other odd things, like finding and pressing on the awake sheep in a screen full of sleeping sheep!).

Additional useful features include sleep monitoring and the ability to postpone an alarm, e.g. set the alarm to be an hour later than usual for one cycle, without having to cancel your usual alarm and set a new one up.

I'm using Gentle Alarm for approx. 10 years now. It meets all your needs and is very reliable as you can see in the ratings of the app.

Never used any other app (like AlarmDroid), so I can't really give a comparison here. But the main feature with Gentle Alarm obviously is also to add various alarm modes with increasing sound (mp3, downloadable nature sounds, ring tones, you name it) volumes for different scenarios.
E.g. "Sound alarm from volume 3 to volume 12 over a duration of 10 min with exactly 2 slumber possibilities on workdays."

The only downside could be the design. It wasn't updated for about a year and there's no material design thingy going on. However this is nothing I care about as long as i know where to find things and that it works.

There's a free trial version which has ads and doesn't ring on wednesdays...

Not the answer you're looking for? Browse other questions tagged android alarm-clock or ask your own question.