SmartHome: determine a persons location in a room

I am looking for a solution for my smart home to determine a persons location in my apartment.

I would like to say exactly (+/- 1m variance) where that person is in my apartment. 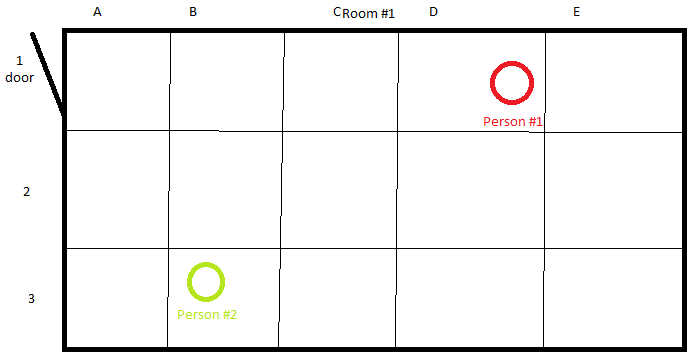 If you have any ideas to solve this I would be happy for your advice!

It is ok if people need to wear some technical stuff to make it work. Maybe I can later hide it in objects you always got with you. I am also a fan of bio hacking but I keep that for later.

Bluetooth beacon is what you are looking for.

Smart phones like iPhone and other Bluetooth devices such as iPod touch can detect the occasional signals emitted by these beacons.

Often these are used by the human to determine their location such as a shopper in a Home Depot or Target store for proximity marketing, or providing contextual information such as a visitor identifying artwork in front of them in a museum. In such a situation the beacon is attached to the shelves or walls and the smart phone scans for the occasional blips emitted.

In your situation, you may want the opposite strategy, as you seem to want the room to detect the presence of the humans. Have the humans wear the beacon and affix an iPod touch or some such device to the shelves or wall to detect each human passing by. For more than a few hours of detection, you'll need to have the iPod touch plugged in to a power supply.

There are a variety of vendors for this technology. For example, Estimote. This is a fast-changing field now, so I’ll not recommend any particular one. Plus you did not really provide enough criteria to make a recommendation amongst concerns such as price, size of hardware, color/aesthetics/fashion of the hardware, mode of attachment, battery life, technical support, type of software library, etc.

Those vendors provide libraries for triangulating a user’s position within a room containing multiple beacons. Sub-meter accuracy is possible.

Apple in particular has been a leader in this space, defining the iBeacon protocol and framework. Google followed, launching its Eddystone Bluetooth beacon system for Android in 2015.

So apparently there are already a few systems for doing "GPS" based on wireless signal strengths (from multiple home routers, the "free" wifi in a mall, etc) with accuracy to a meter or two.

A quick Google shows that the geeks at Stanford have developed something called SpotFi that increases accuracy to 40cm or so... but a little more Googling doesn't show a commercial offering. A few white papers, etc. though.

Not the answer you're looking for? Browse other questions tagged geo-location home-automation or ask your own question.