Webapp that predicts the reading of a Japanese given name

A Japanese given name often has several way to be read, and you can not be 100% sure before the person tells you or see their email address.

I am looking for a website (or Android webapp) that quickly gives the most probable way to read a contemporary Japanese name.

Bonus if it gives percentage, for instance:
貴子: Takako (90%), Kiko (5%), etc
This should not be difficult as databases of names popularity are readily available.

Please note that usual kanji->kana/romaji transliteration tools (like the ones I maintain) do not handle names, outputting readings that are never used for given names.

I have found http://kanji.reader.bz to be rather adapted to this use. Enter the kanji given name in the input field, press the button and you get a list of possible pronunciations:

The one that was introduced by my 先輩 since the first time I learnt Japanese 6 years ago is WWWJDIC. It's so famous that a lot of online dictionaries I found use the database from WWWJDIC 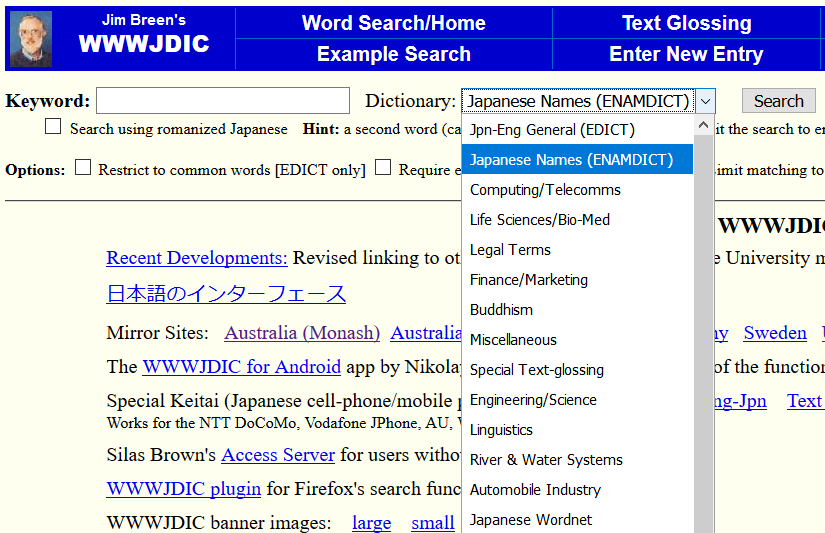 It isn't limited to person names but also place names

The Japanese Names (ENAMDICT) file which contains Japanese proper names; place-names, surnames and given names. The basic format of the ENAMDICT file is the same as the EDICT file, however for ease of use, the version used by the WWWJDIC server has been modified to include all the possible readings of a name within the one entry, with the readings approximately in frequency-of-use order.

Another dictionary I often use is jisho.org

For example 貴子 also gives the above 10 pronunciations

Some others I've just found

As a side note I really like WWWJDIC's Text Glossing feature which is sometimes more useful than a normal web translator. However for multi-radical Kanji searches I find jisho.org much better

Not the answer you're looking for? Browse other questions tagged gratis android web-apps japanese or ask your own question.