Geometry and position layer over an image

I have a scaled picture of my garden, I have some points in my garden measured by surveyors.

The last point refers to triangulation method I do by myself: I want to position some objects on the area by myself, measuring distance from known points..

Does some such software exist (preferably free)?

You can not do that on a single photo.

If you have a clear perspective you could make a 3D model with it using Sketchup. https://help.sketchup.com/es/article/3000115

Rescaling with a known measure and then take approximated measures with this 3D model.

Sketchup works with an app called Canvas io, and you can pay some dollars to have a clean and accurate 3D model from that point cloud data.

You may be able to accomplish your goals with a combination of programs. It's possible that even a single program such as Inkscape may serve your purpose.

Import the image you described. One must have an orthographic layout, that is, no perspective distortion, although you could use an image editor to correct for that as well. You have specific locations identified already, which means you can scale the image using those settings in Inkscape.

Scaling the image appropriately and placing it on the coordinate system within Inkscape can provide you with the pointer reference noted in the question.

There is a free version of screen calipers available for Linux users but without the user-adjustable calibration.

If that is not practical, using a program known as Screen Calipers which would allow you to reference known distances and change the calibration of the screen caliper to match. This would permit you to pick locations and read distances directly.

By re-scaling the image, you'd get your coordinate ability. Using Inkscape (free) you get the ability to draw circles, ideally on a layer separate from the main image. The free part goes out the window with Screen Calipers as it's nearly US$30.00 for the non-trial version. 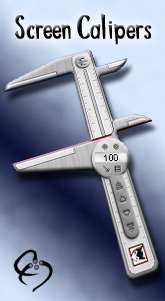 I believe an almost perfect answer to my question is a free (for non-commercial purposes) software named geogebra, geometry package:

It can be downloaded and used off-line. You can provide a background picture (of an area, Media->"mountain" menu) and work on an layer above it: you give points coordinates, you draw circles, you can read-out point positions once you place points by clicking.....

Not the answer you're looking for? Browse other questions tagged image-processing geometry or ask your own question.