Is there a software to stylize a 3D animation (make it more 2D when 3D work is done)? To be more specific, I need a software to cut down the process of faking 3D. I know some of them have “automatic inbetweening” but it’s not enough.

Cartoons such as Simpsons, Family Guy … are very simple and 2D alike. But others like Megas XLR, Ben 10, Ghost in the Shell, a lot of other anime … When you watch them the 3D movements of the character has more volume and form and think it's 3D animation. But when he turns his head in 3/4 view his eyes don't obey the rules of perspective. Those cartoons look like a hybrid of 2D and 3D animation. That’s what I want.

The 3D image (the left one) is not 3D-accurate but lets pretend it is for the sake of point: 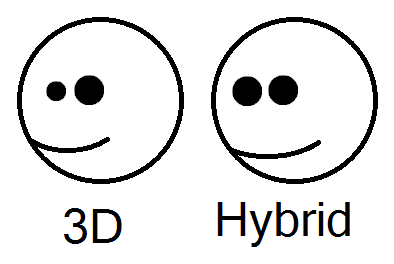 So I believe animation studios have software integrating 2D and 3D features together. But I’ll be happy if I can at least use a finished 3D animation done in a 3D software (like Blender), then use the frames to 2D stylize it (to break the perfect 3D rules) for artistic and other purposes. With my limited understanding I imagine what's on the frames should be converted from raster to vectors to manipulate it in 2D.

Is there a free or open-source software of that nature or I’ll have to stick with Synfig and OpenToonz?

With all that in mind here's a list of features.

Nice to have features

Blender does all of what you already want and with 2.8 coming out soon it's going to be a HUGE game changer to 2d animation. As you can see from this film.

Blender's free and open source (programmed in python) runs on Windows, Linux, and Mac operating systems. I've also seen people port and run it on Chromebooks and Android tablets, but keep in mind it's not specifically designed for those devices.

Basically, Blender 2.8 will be the best free alternative to date to popular top of the line toon animation software like Toom Boom Harmony which is used for The Simpsons Movie, Family Guy, Spongebob Squarepants, Futorama, South Park, Rick and Morty, etc:

I still think Blender is already a great free alternative to Toom Boom Harmony except sometimes 2D animation is just a long process so sometimes I have to adjust the software I use like Synfig Studio, Animatron, Google Web Designer, or even Edge Animate v1.5. All are more for 2D. Blender is the closest you'll find right (that's free and open source) for a good mixture of 2D and 3D while working within a 3D space.

Not the answer you're looking for? Browse other questions tagged open-source animation or ask your own question.

1
Open Interactive Animation format for Research
6
Simple 2D Animation software for infographics-like animations
4
What software did Elon Musk use for the SpaceX presentation
2
What is the software to use to render 3d animations of animals?
0
Suitable software for animating technical diagrams?