Which platforms to use for writing documentation/help/manual?

I came to a point where it is absolutely necessary to have some kind of documentation about my product. So some sort of help or user manual for customers, because i want to reduce the number of emails.

So I was looking for something that allows me to:

Something like Manula for example. Manula is not free, which is not a problem, but is rather expensive, which does represent a small problem. Is there anything similar and perhaps something you would recommend?

What do you use?

To expand on the internationalisation, often called I18N because it is a lot less to type, Sphinx uses the same tried and tested that the majority of open source projects have used since gettext was released in 1995.

You use a Message Catalogue Builder tool within Sphinx to produce a set of pot files which are message catalogues, strictly portable object templates, containing words, phrases & paragraphs from your original document. Copies of these go off to the translator(s) for the desired language(s) who use a tool such as Pootle or poedit to provide their individual translations and return them as portable object, .po files. Note that this can all be done collaboratively using services such as Transfex.

These .po files are run through the gettext msgfmt tool to produce message objects, .mo files. Once these have been added into your project, at a language specific location, you can run Sphinx again specifying the output language and your documents will be output in the requested language. Any missing translations will remain as the original text.

One of the big advantages of this approach is that if you make changes to your documents, as inevitably happens, the tool chain shows the translator(s) what is already translated and they only have to update the new/changed items and any incorrect items. Another is that you never have to maintain multiple copies of your source document, (usually this ends up as one per language), just of your translation files. 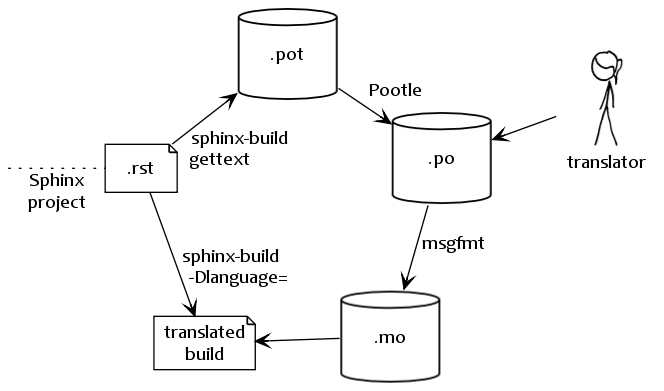 If your documentation includes diagrams with text you can use one of a number of Sphinx extensions, such as the Graphviz extensions to generate the diagrams automatically, in the case of Graphviz using the dot language, or you can Generate diagrams & charts by embedding some python in your document which will allow your diagrams & charts to be automatically updated at the time of building your document, you can even overlay text on images & photographs this way. The nice things with this is that you are embedding some text that produces the chart, etc., rather than embedding them directly which is better for both version control & internationalisation. There are also extensions for Google Charts & Maps

Libre Offfice's "writer" will let you generate both to HTML and PDF.

When the time comes, you can easily make your documents ready for the Web via Writer's HTML export feature, or you can automatically publish to a wiki in MediaWiki format.

If you need to be sure that what you publish is viewable and looks exactly on every kind of reading device and platform, the "Export as PDF" (.pdf) feature generates a .pdf file. LibreOffice's PDF export feature provides a large number of formatting and security options, enabling you to cater to many different constraints, including production of ISO-standard PDF/A files.

Lately I've been seeing Read the Docs being used in a lot of (OS) projects. As far as I can tell it's mainly aimed at code documentation, not sure if that fits your need.

Read the Docs hosts documentation, making it fully searchable and easy to find. You can import your docs using any major version control system, including Mercurial, Git, Subversion, and Bazaar. We support webhooks so your docs get built when you commit code. There's also support for versioning so you can build docs from tags and branches of your code in your repository.

Not the answer you're looking for? Browse other questions tagged documentation-generator or ask your own question.