I know I can use an SSH client on Android to perform tasks like copying and renaming files. However this method is tedious on a touch screen.

Is there software which will allow me to easily perform these operations with a graphical front end?

I'm not trying to copy files off or onto the remote server. I simply want to copy and rename files which are already there.

It could either be an app which sits on top of an ssh connection, or something standalone which requires specific software on the host.

You could use ES File Explorer File Manager. Though this is mainly intended as file manager for the Android device, it can deal fine with network ressources as well. I use it for years already, and am very satisfied.

A detailed howto for your issue can e.g. be found in a blog article named ES File Explorer – App for sharing files between Android and Windows. Though described for use with Windows, the Android part can be applied 1:1 after creating a Samba share on your Linux machine (that's what I did, as it proved the easiest and user-friendliest way). Alternatively, you can have your Linux box serve the file system via FTP.

Once set up, you find your Linux FS in the network section, and can deal with it like with the local file system: copy/paste files, edit, remove, or rename them should be easy tasks (I must admit, I mainly use it to copy files between my Linux machine and the Android devices).

You can find the full manual on the developers page, and might especially be interested in its network section – which a.o. explicitly mentions you also can use the protocols FTPS, SFTP, and WEBDAV. This means, if you don't want to install Samba or FTP, simply use it via SSH, which on most Linux distros ships pre-installed.

Long-pressing a file name/icon then should reveal a context menu. Here's a screenshot from an older version of the app: 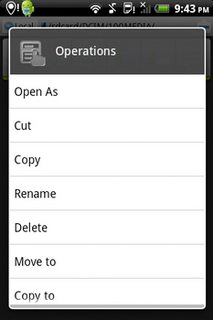 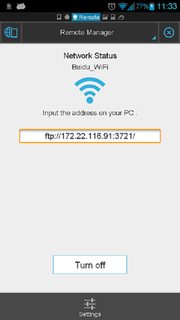 As you can see, all you've asked for is present:

Just for completeness, I've included a second image showing you two things: a) the GUI has been updated, and b) it can also work the other way around :)

As written above: I'm using this app for years now, and am very fond of it. When looking for a file manager app on Android, this is the first one I always recommend.

Not the answer you're looking for? Browse other questions tagged linux android remote-access ssh or ask your own question.