I've been a happy user of FeedR for at least 5 years. But unfortunately, its dev stopped development¹, and thus won't add new features or fix issues anymore. So I'm looking for an alternative which comes close to FeedR: 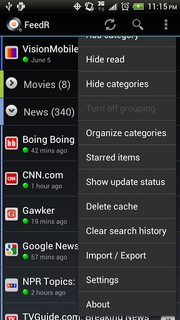 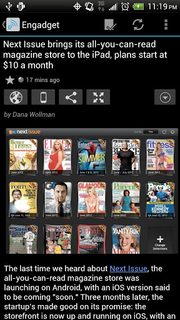 Open-Source and availability via F-Droid preferred, but not a must. If it comes to paid candidates, the limit is about 5 bucks and it should have a free trial to test (or your description of it must be really convincing).

Candidates I've found so far (but not yet tested):

These are just some things I've found on my search. I don't ask for a comparison of those, nor do I want to limit your recommendations in any way. It's just to give you some ideas ahead :)

So now, looking forward to your recommendations – thanks in advance!

¹ last release is from 2013; fair enough, Peter made it a free app when stopping development (was paid before)
² Google Services Framework; I'm using microG instead
³ This was a PS as I forgot to mention it. So don't blame answers posted before XMas 2016 to not having considered it :)

I'm part of the team that handles this app, but I'll be as objective as possible. The prerequisites are fulfilled with the exception:

Concerning "Nice to have":

This application evolves a lot with the feedback of users. So do not hesitate to comment or ask questions

And it's free and we intend to stay free, while adding more features.

I've only used it a short time but I recommend "Feeder.co": Website & Playstore

I originally found "Feeder.co" aka "Feeder" as a chrome extension but it looks like they do have an early access android app available.

I am using spaRSS for some years now.

Open-Source (✓) and availability via F-Droid (✓) preferred, but not a must. If it comes to paid candidates, the limit is about 5 bucks (✓ for free; I would pay for it) and it should have a free trial to test (or your description of it must be really convincing).

In addition I would like to highlight the following features:

You don't seem to have tried Inoreader. The only required feature it doesn't have is wifi-only, however you could install AFWall (available on F-Droid, requires root) which will let you control whether any app can connect over mobile data or wifi.

It supports all of your "nice to have" features. You can add feeds manually using the icon in the top right corner on the search screen. It even lets you search for popular feeds and such.

You'll have to import opml from the web version though.

Not the answer you're looking for? Browse other questions tagged android rss feed-reader or ask your own question.

1
Free feed reader for Android which allows editing of feeds