I need to save some important Twitter conversations as image files for a project.

On desktop Chrome, Twitter conversations live in a floating window above a background page.

I've tried many screenshot / screen capture Google Chrome extensions that have a "scrolling capture" ability. All of them result in the same situation:

The screenshot / screen capture ends up consisting of a part of the conversation (floating page), and a part of the background page (see attached image for clarification).

Any thoughts / suggestions on how to fix this situation? 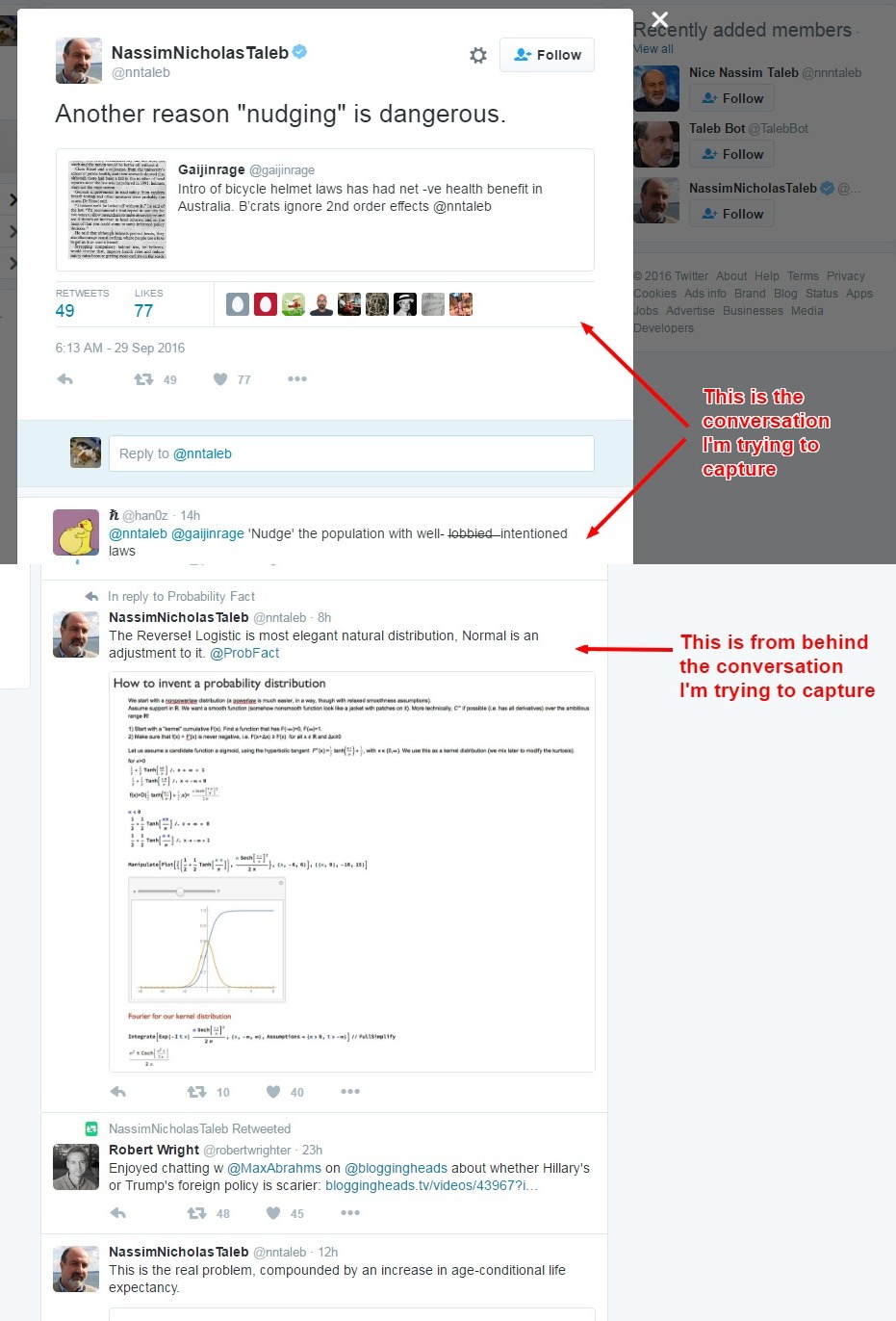 I just successfully used Snagit to capture a whole string of related tweets and comments. Use the Scrolling window (web page) capture option with the custom scroll setting on - it's underneath in the profile box in my version of Snagit. There are two things that you need to do to capture the floating twitter box that contains the original tweet and the follow up comments which disappear down the page.

I only know two ways to do this.

Using an Extension which Screengrabs the entire page, then photoshopping out the parts i don't want.

Edit for script on computer start

You need to modify the CSS of Twitter to enable the scrolling. (I used Awesome Screenshot but it should work with other extensions aswell)

I've created a small JavaScript you can save as a bookmark in your browser and run before capturing the screenshot. It's nothing fancy and only temporary, once you reload the page, you would need to run the script again.

Or just simply drag this link into your bookmarks: Twitter Screenshot

Edit for script on computer end.

Or on my Phone, the S7 Edge allows you to capture "scrolling screenshots" I'm not saying go and buy a $700 phone to capture this screenshot, it's just the only other place i've seen it.

If that extensions gives you issues i've captured the screenshot for you to use if you wish.

A lot of things have changed since, with Twitter, and I think they've made it easier to screen-capture threads.

I currently use an extension called "Full Page Screen Capture" and it seems to work for the most part.

You can do it with a simple free browser extension like Awesome Screenshot that captures an entire page. You need to modify the CSS of Twitter to enable the scrolling.

I've created a small JavaScript you can save as a bookmark in your browser and run before capturing the screenshot. It's nothing fancy and only temporary, once you reload the page, you would need to run the script again.

Or just simply drag this link into your bookmarks: Twitter Screenshot

(Feel free to delete this once my edit has been accepted, I know this is an old topic but I've stumbled upon it and maybe somebody else will in the future.)

Not the answer you're looking for? Browse other questions tagged chrome screenshot twitter or ask your own question.