Open-source editor/IDE for Linux and Windows

At the moment I'm using Sublime Text 3, but I'm looking for an open-source alternative for it, that:

Emacs has a lot of the features that you are looking for built-in or able to be added in through packages. So if Emacs does not come with a built-in feature you want, it has over 50 years of support and customization to add in features. It is best supported on GNU/Linux distros, but also has versions for Windows and OS X.

For syntax highlighting, it comes with AWK, BASH, C/Cpp, Python, Fortran, Java, JavaScript, PHP, Pascal, and HTML. Any other language syntax can be added in a directory.

Emacs comes with three commands to run shells by default: M-x shell, M-x term, and M-x xterm. So you don't get just one terminal option, but three. The terminal can be split into multiple windows and switched between each other with a keyboard shortcut.

As Emacs was written with Lisp in mind, parenthesis highlighting is built in as well as brackets.

Though learning all the keyboard shortcuts take a while to learn and get used to, there are GUI versions of it as well. And if you prefer Vim, you can even run a version of it in Emacs called Evil. You can look at their website or their guided tour to see if it is right for what you are looking for!

Atom is good though it may not complete your expectations out-of-the-box and you may need to install plugins.

It is very good and is compatible with most GTK themes and works well with large files. The only tradeoff is that as it is built using Web technologies so it's usually a little slow to start but then it works flawlessly.

Visual Studio Code is a strong candidate. It comes with more stuff out-of-the-box than Atom, and is noticeably faster (despite being built on the same foundation).

It's free and open-source. It's available for Linux and Windows (and Mac). I honestly don't know if it uses GTK on Linux, but it's highly themable, with many third-party themes available.

It comes with syntax highlighting for HTML (not sure about Jinja2), CSS, SCSS, JavaScript, TypeScript (would be weird not to, as it's the primary development language for the whole project), Python, Rust, and C++. (And a ton of others.) Stylus and Vue support is available through extensions.

Has linting for numerous languages, often implemented as integration with established, existing linter projects. I'm confident if you include available extensions, you'll have what you need.

Not sure exactly what features are implied by "code intelligence" but there is definitely IntelliSense support for plenty of languages.

Has Emmet and built-in terminal.

Has Git integration and obviously a plugin system.

Most if not all the other requested features are either also already included or very easily available through extensions.

It's also being improved at a fairly impressive pace. It's a younger project than Atom but has already basically caught up if not exceeded Atom.

Small tidbit for Sublime Text users: VS Code specifically tries to emulate ST's bracket completion behavior rather than Atom's (they are slightly different). There are probably a number of other design decisions where VS Code has tried to follow ST's lead. Though honestly, all three of these editors (Sublime Text, Atom, VS Code) are quite good, and the Internet is full of blog posts and forum comments from people who have switched in all directions (and often back again) among the three. 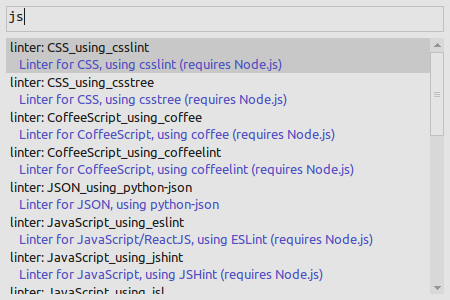 You can use Notepad++, It is with a lot of Features like :

For Linux (Also for Windows) :

But Sublime Text 3 is Flawless

Not the answer you're looking for? Browse other questions tagged windows linux open-source ide or ask your own question.