An open alternative for Evernote?

Since Evernote's recent pricing changes, I don't want to trust important personal data to their company any more, and I've been hunting for an alternative. Unfortunately there're not a whole lot of note-taking apps that'll fit the bill. Here're my major requirements:

I think that covers it. Thoughts?

Update: StackExchange just pointed out that this question is a possible duplicate. That question's top answer is Google Keep, which doesn't even have an API (seriously, Google?). To make this question obviously different, I'll re-emphasise that the most important thing for me is to keep my data open, ideally in the form of plain Markdown files.

Laverna can be a good free alternative to Evernote in all respects.

You can find more on Laverna's GitHub page.

I thinks Laverna meets the requirements quite well.

Another open-source Evernote alternative is Turtl, currently in beta -- but more than simply being an alternative, it bills itself as being a secure alternative:

I learned about it from a recent post on WebUpd8 which included this screenshot: 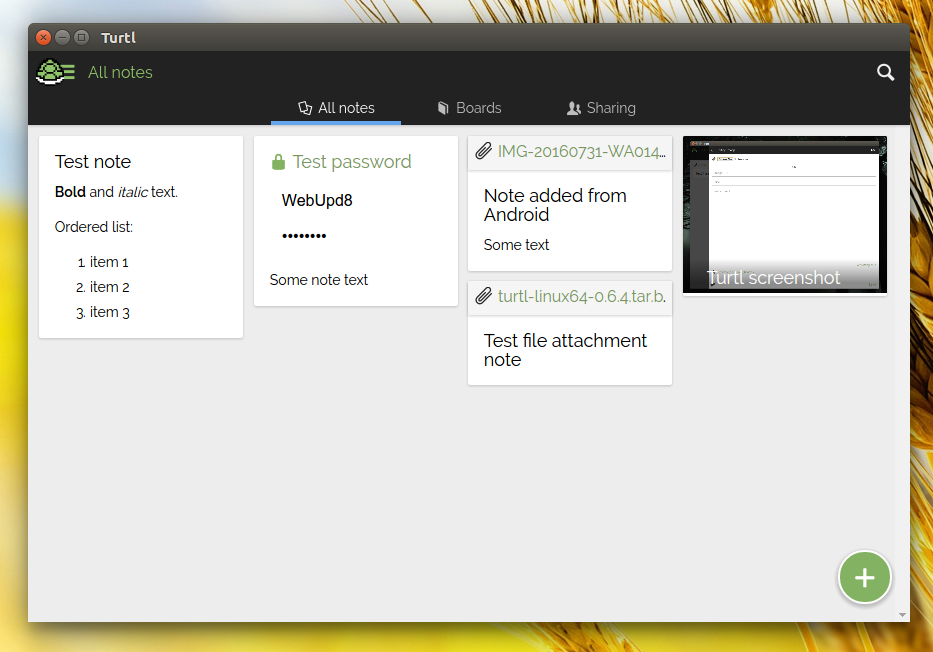 While in beta, it is "free" to use the Turtl servers, although there is a planned premium upgrade in the works. But it is open source, the project hosted on Github, and so you can run your own server as well.

In terms of features, it meets these requirements from OP:

Well worth a look, since it looks like it could meet OP's needs nicely.

This is an open source clone of Evernote.

This program has been run on Linux, Windows, and OS-X, but the primary goal is to proved a Linux client. While this is designed to work with Evernote, it is in no way connected with or supported by Evernote. Any problems you encounter will not be corrected by them and, since this is GPL software, you are using this software at your own risk.

People have used this with both 64 & 32 bit versions of Linux as well as OpenJDK & Sun's Java and (so far) have not encountered any problems with these different environments.

All the installation information as well as known problems and currently supported features are located within this public notebook.

Not the answer you're looking for? Browse other questions tagged open-source note-taking markdown or ask your own question.

10
Now that Evernote free is limited to two devices, what should I switch to?
5
"Local" notes - combined with cloud
1
Alternative to Evernote
1
Markup compatible notepad
1
Evernote with custom properties. Notion with full offline support