I tried "Windows Hotkey Explorer" (WHE) and it exploded in my face in a spectacular fashion. (Do NOT ever run this if you are on Windows 8 or higher. It will just PRESS each and every hotkey. You will end up with a zoomed, flipped, narrator-activated, unusable desktop.)

So. Is there something that does what WHE tries to do that actually works in Windows 10?

I have googled without success.

Yesterday I spent about an hour looking for the program that caused notepad to no longer accept Ctrl+P. Normally that hotkey opens the "Print" dialog. Yesterday it did nothing at all.

It turned out that the QNAP NAS utility QfinderPro.exe had somehow grabbed that key combination. As soon as I had stopped that program Ctrl+P started working again.

And I would like a tool that could tell me what hotkey is registered by what program. Basically I am looking for a version of WHE that works on Windows 10.

@obe recommended NirSoft HotKeysList. I will try to rephrase his recommendations in a form more suitable for this forum:

Unfortunately, this program will tell you that a hotkey is in use, but it will not tell you by what process. It could be quite valuable if you paired this with the troubleshooting processes recommended in this SuperUser link. As an additional bit of unfortunateness, it is also completely unsuitable for the OP's purpose, as the software explains: "This utility works on any version of Windows, starting from Windows 2000 and up to Windows 8."

The software is free for use, as are most NirSoft offerings. 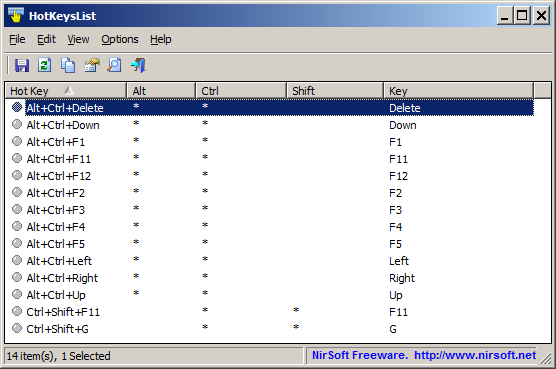 It doesn't seem to give a full list on my machine but it gives some. Hope it helps.

Not the answer you're looking for? Browse other questions tagged windows-10 keyboard-shortcuts sysadmin or ask your own question.