I'm looking to convert a very messy* set of reference PDFs to wikitext. Ideally, I'd like to make this process a simple one-and-done application, but understand that such a tool may not be available. Using a series of intermediary tools is possible.

It's preferred that intermediary tools meet the following specifications (The first two are merely preferences, and can be disregarded in favor of functionality):

*The PDFs in question are both difficult to use, as they frequently refer to pages within themselves and within each other, without internal linking. They also happen to use a two column formatting, which most of the convert-to-HTML/text tools I've tried so far (Calibre/FoxItPDF) can't seem to handle - They either export the text on the same line, or they create paragraph elements that alternate between the two columns - it might be possible to transform these output files using some jQuery, but that's a lot of work for little gain.

I suggest you perform the following steps:

There are a few free online tools which perform the conversion with a very good quality. The one I like most is SmallPDF. I think this approach is better, compared to pdftotext, because it has good heuristics to detect headings and preserve essential formatting (bold, italic).

You can use Pandoc to perform the conversion from DOCX to HTML:

The -s (standalone) switch is important, because it will save encoding information in the HTML file. If you open the file with a web browser, you want to see it correctly.

A caveat I've noticed while testing is that slightly indented paragraphs might be considered <blockquote>s by Pandoc. Keep that in mind while performing your conversions. You might also want to check the HTML file before performing the final step. Formulas will probably be broken.

You can do this step using Pandoc, too. Theoretically, the HTML step may not be necessary, however IMHO it is useful to check that everything is OK using a browser for a quick preview.

I tested this method with the paper Imperfect Forward Secrecy: How Diffie-Hellman Fails in Practice. The original PDF looks like this: 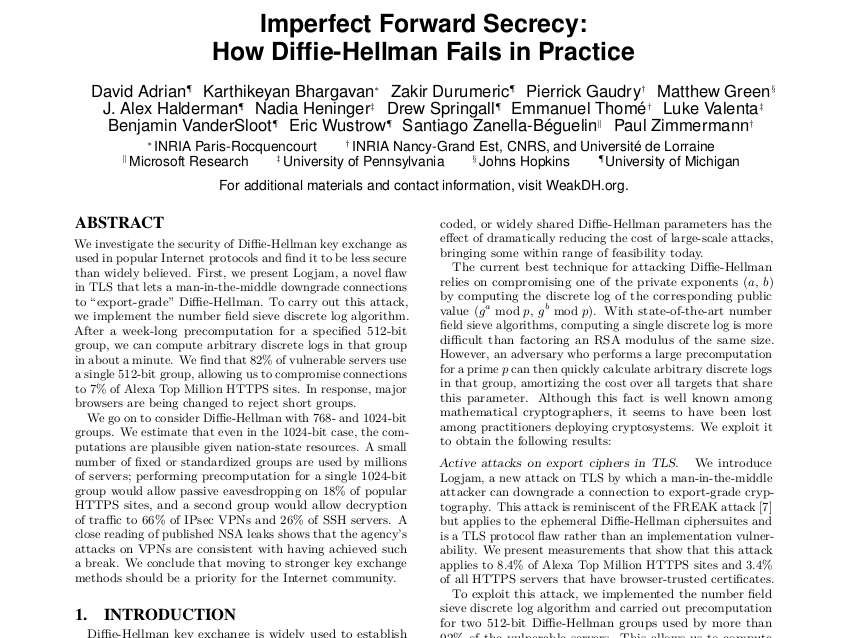 The HTML file (after the first two steps) is quite good: 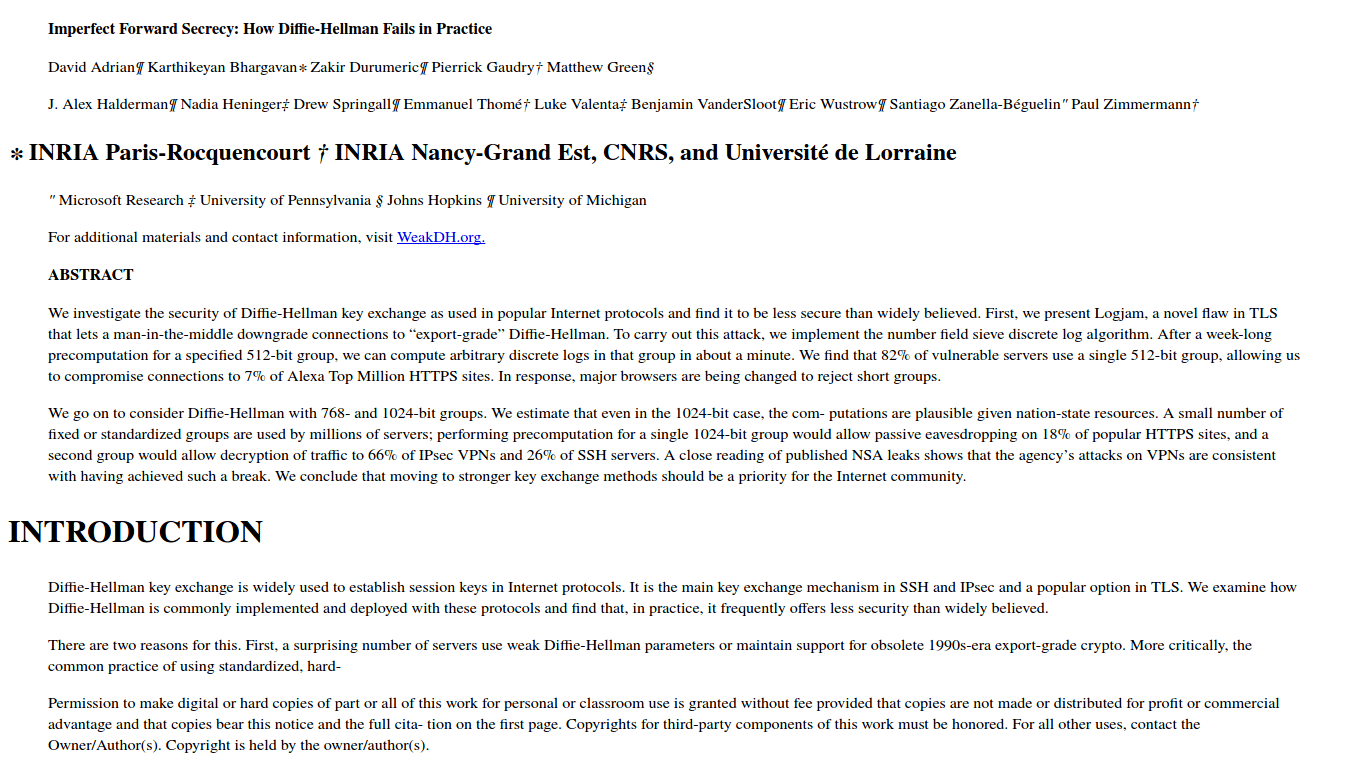 The indentation comes from paragraphs treated as quotes. I believe it can be fixed by tweaking the DOCX file, if needed.

Finally, here's an excerpt from the MediaWiki code:

After some experimenting, I've come up with a multi-software solution on Linux shell. It preserved formatting very well in my attempts, so I can say I'm pleased with the results of the HTML conversion. The mediawiki output may still need some cleanup on occasion, but overall we got a very good result.

These can be installed using the following commands (Ubuntu Linux 14.04 assumed. Adjust directions for your version of Linux. Some of these tools might also work on Windows, but I'm not providing install or usage instructions for them.)

Pandoc specifically recommends downloading the .deb and installing from it - however, if you don't mind an older version and are willing to risk any bugs associated with it sudo apt-get install pandoc might work just fine.

Poppler includes a number of command line tools to extract things like images from PDF, and they are better detailed here.

This command will create a lot of files, which is why we contain the results in their own directory. It will extract any images in the file, so all of those will be saved there. It also creates two HTML files, one of which will be an outline, and the other of which will contain all of the text in a formatting very close to the original.

You can type pdftohtml -h to gain a better understanding of available parameters.

I've explained the parameters used here for the sake of understanding the command:

Poppler also has a pdftotext command. This was the only tool I've found so far that handled PDF extraction well in an instance of having two columns of text. While other tools were printing straight across from left to right or alternating lines of text from the two columns, Poppler put the text together in the right order.

(or just about any other format!) Pandoc is a very useful command-line program that converts an input file in just about any format to just about any different output format. Staying inside the same directory, simply run the following command:

This command simply takes the HTML file and writes it in equivalent MediaWiki format to a txt file. I've provided some breakdown of the parameters for basic usage in case you need to convert to another format.

For more info on Pandoc, read the user guide.

It is possible you may run into an error with Pandoc, presumably caused by your file being too large. I ran into this error and some fixes can be found here.

Depending on your PDF encoding, you may find strange Unicode charecters in your HTML output. This step is intended to clean up this output to the best possible degree of accuracy. ftfy, stands for fixes text for you, and it's a Python library with a command-line interface. We'll be using the command line to clean our files. This step is preformed before using Pandoc.

Or, if you system has pip, pip install ftfy. Note that if you want to use a version of 5.0 (most recent available at time of writing) or later, you need Python 3. I used Python 2.x with ftfy 4.1.1 for this answer. Using the same directory, type the following command:

Optionally, you may include the --guess option to have ftfy guess your encoding, or --encoding if you know your encoding. This may produce better results.