I just need some piece of software to quickly open a font file and check what's inside. Requirements:

EDIT
I forgot to clarify a few things.

Firstly, I need to define what I mean by "font viewer". It is not the application that shows me a portion of text typed in the selected font, it is the application with the interface similar to BabelMap. The reason of my dissatisfaction with BabelMap is that it's not a font viewer, it's a character map which shows me the entire Unicode grid, but... what should I do with such a grid? Suppose I open a font that contains only 100 glyphs. What will I see? A giant Unicode grid with many thousands of empty cells and a small amount of cells showing how its corresponding char looks in the font??? This type of interface seems totally useless for me. I expect to see a grid with all glyphs contained in the font, but without glyphs not supported by the font, and without empty (unused) cells.

NexusFont has a portable version available for Windows. It was written by JungHoon Noh. It allows you to view and compare font files. It is completely free.

I have used it extensively, and I can recommend it. 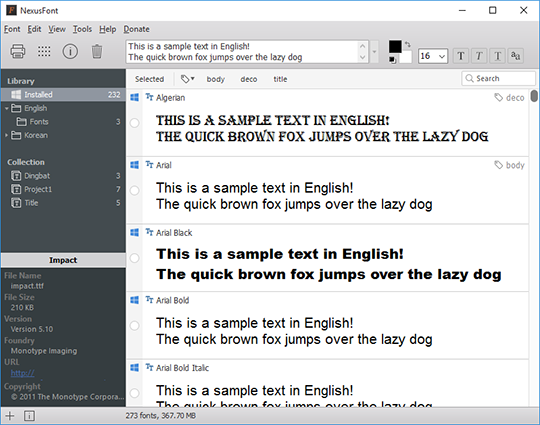 I've used two Font Viewers that are portable, open source, gratis, will show fonts in other folders, and will display all characters in the font package but not in a grid. You can download and try them, if you wish.

Hope these will help!

Not the answer you're looking for? Browse other questions tagged windows gratis portable font-utility or ask your own question.

15
Font editor for Windows
12
Portable app for calculating one (selectable) hash for a selected file?
2
How can I view fonts with Ubuntu?
3
Free image viewer on windows with zero data collecting policy