I am a web developer - and I also work with the windows command line; bash command line; and several advanced digital audio workstations, as wells as graphic design software. I'm only saying this to make the point that I need to remember lots of commands and facts - and as I'm often using different programming languages/libraries, lots of different programming arguments, functions, etc. Keyboard shortcuts also... In short - a lot of stuff.

What I'm looking for is some kind of popup sidebar that stores various commands and data. I've tried my hand at making something like this several times, but it always begins to look like it is going to take too long and not really do what I want the way I want. Ideally this would have a simple way to feed data into, and perhaps could parse display multiple different filetypes; e.g. .man,.chm,.md,.txt,.rdoc,.etc. Also it would have to be lightweight (like Ideally no window frame at all - this seems doable on windows 10), low on resources, quickly togglable with an easy shortcut.

This is a concept image: 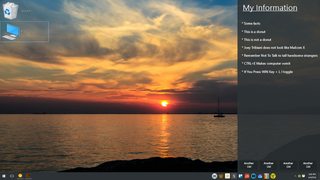 Actually - it'd be kind of like the Windows 10 notification center, but it would display useful stuff instead of multiple options I don't need.

One more thing. I know this is theoretically possible with Rainmeter, but for various reasons I'd like a different solution.

Browse other questions tagged windows information-management keyboard-shortcuts documentation-viewer or ask your own question.