My 12-year old is addicted to Minecraft, which I don't mind so long as he does other things and his school work does not suffer. To help him, I want a monitoring program that will restrict his daily usage of certain programs.

This is not internet usage monitoring (though Youtube videos of people playing minecraft is also a problem but that can be restricted with NetNanny and such).

I have looked around but can only find programs that restrict internet usage and browsing habits. Are they any that will monitor usage of installed applications (this is on a family PC running Windows 7)? My price limit is about EUR 50.

Take a look at Qustodio

While there primary focus is on protecting Internet activity, they also offer 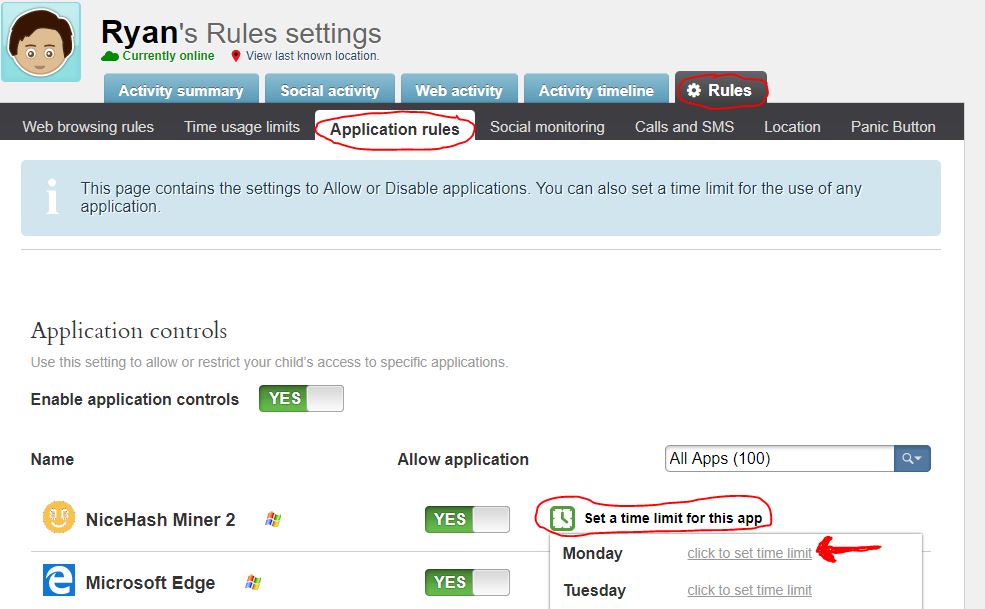 From my personal experience, I've been impressed with it so far.

I think I can now answer my question more usefully.

I tried Qustodio which looked promising but was too restrictive: once the computer time was used up with time-limited applications, access was completely locked, meaning the kids could not use any non-restricted stuff either. They also got no warning prior to the lock-up. On the plus side, it shares the allowance across devices (Android, iOS and full Windows) and so they couldn't just switch to another device and carry on.

I have reverted to ScreenTime on their android devices. This allows you to block specific apps after a certain time but still allow others and has various other limits for blocking apps during school hours or after lights-out. Unfortunately the time limit is not shared among their apps so they can switch to another device once their time is up and I just have to account for that by reducing the time allowed. ScreenTime plan to add this in the future but don't have a date yet.

On the PC, I have gone with Parental Control 2015, which again kills access to time-restricted applications once time is up but still allows other applications and web-pages. It has web filtering, can monitor multiple accounts and also has a nice feature where you can enforce an x-minute break after y-minutes of use.

Both ScreenTime and PC2015 have web-based management interfaces so I can pop online from work to see what they have been doing and adjust the time I allow them.

If you are using Windows 7 Professional, you can use Group Policy. This is helpful if you have multiple computers connected to Active Directory,

Otherwise, if you're using Windows 7 Home Premium, you can use Family Safety/Parental Controls. To activate this, you can go to Control Panel>User Accounts and Family Safety. The account in question must be a standard account. You can set time limits, program limits, and web usage limits. This is free and comes built into Windows.

(Please note that these won't work on anyone smart enough to find backdoors into your PC, which is possible. A domain account would be easier to lock down and restrict but Parental Controls works fine too.)

Not the answer you're looking for? Browse other questions tagged windows parental-control or ask your own question.