I have a series of Google Forms that require completion by a team. Some forms require the coordinates to be reported. I used to use "Anywhere GIS" to auto populate the lat and lon but this doesn't seem to be supported anymore. Is there an alternative app that provides good results rather than filling in the lat and lon fields by copying from the clipboard in another app? I have a preference to stay with the Google Forms because of other parts of our system. 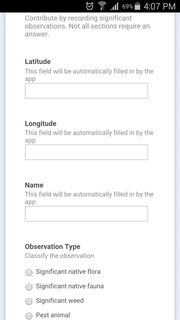 Browse other questions tagged android google-apps gps google-drive or ask your own question.

3
Android app to add latitude+longitude to an existing picture
2
Looking for an android kmz / kmz app viewer with gps support
2
Android app to anonymize a JPG picture but leave latitude/longitude and time
1
Offline map for android able to save the users current gps position
4
Gratis Android camera app, not linked with Google
0
Android Web Browser with Auto Refresh Ideal for Set and Forget