Which Drupal modules should I use for organizing bets?

Consider a Drupal site which bets on sport related content. The required functionality is that the bets can be placed (by registered users) and the points awarded to the winning user (calculated based on the odds).

After the result of a game is entered (by an authorized user), the amount of points gained should be awarded to the winner(s). The loser's points will remain as it is (since they were already deducted in the beginning).

The Prediction game module (which has an official D7 version ...) seems like a great fit for this in a Drupal (version 7) site. There is also the Betting system module (which only has a DEV version for Drupal 6 ...).

Some details about the Prediction game module (from its project page, in which I added the bold markup here):

The Prediction game module lets administrators create leagues or tournaments consisting of several matches, on which bets by players can be made. After each round of matches, the results can be entered and players receive a certain number of points for their bets, depending (of course) on their accuracy.

A score board and practical interfaces for betting and for entering results are provided, multiple simultaneous leagues are supported. One current drawback is that matches of one round have to start all at the same time to be well accessible, but otherwise the module works pretty well.

Here is a screenprint of it (from its project page): 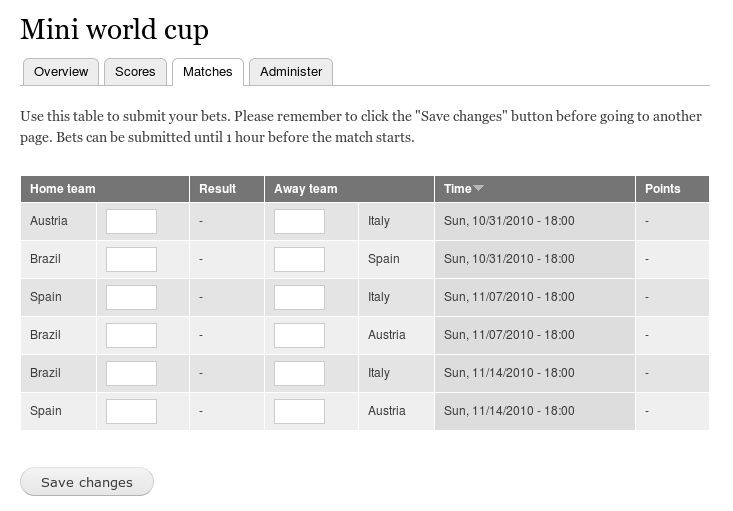 To get you going with it, refer to its README.txt, which includes this:

After enabling the module, go to "Administration » Content » Prediction games » Teams" and create some teams. Then, you can create one or more competitions on which people can then bet.

After creating a new competition, you should probably put a link to it somewhere on your site (e.g., in some menu), so users will find it.

Not the answer you're looking for? Browse other questions tagged drupal sport or ask your own question.