I am looking for a free Android app (to run on an S4) that can monitor and record signal strength for my mobile phone and/or mobile data connectivity while I'm underway within a specified timespan (either explicitly indicated as times or by pressing a start / stop button).

The app should output the recorded data as something like a signal strength/time chart (a line chart, or possibly a bar chart if the recordings are chunked in defined sampling intervals). Bonus points if the average between several recordings (possibly allowing for some manual temporal alignment) can be computed.

Based upon the resulting charts, I would like to compare my connectivity of different alternative routes that I can take on my daily commute, with each chart providing something like a "characteristic line" for the respective route.

This question is very different from the seemingly similar Monitor mobile phone network signal, as I am specifically asking for recording the monitored strength over time rather than just retrieving the actual state. (Also, I am fine with something that entirely runs on Android and does not transfer its results to a computer.)

There are several possible candidates in my corresponding app list, Monitoring & Mapping. I've tried a few of them a while ago with different results. The most convincing (to me) was RF Signal Tracker: 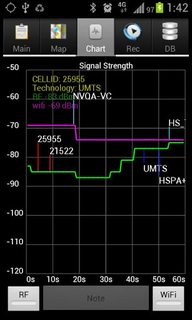 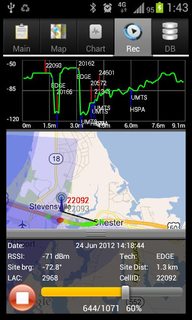 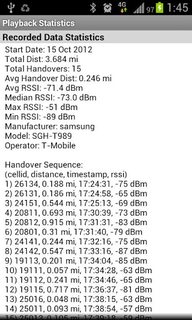 I hope you don't mind the older screenshots (don't be irritated; the app was last updated just a month ago), but they show the capacity very well. The app gives you nice real-time data (see the first two screenshots), and also a good detailed log (3rd screenshot). You can also export the records to .csv for later analysis e.g. in Excel/Calc. Bonus with this app is the ability to record and later playback a session, which might come in quite handy sometimes.

For an alternative, take a look at G-MoN, which has quite similar features: 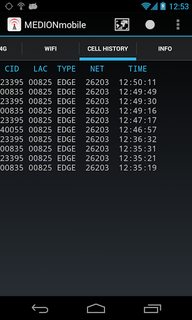 In addition to .csv, this app can also export to .kml for later investigation with Google Maps or * Google Earth*. I do not remember what kept me from sticking with this one, but I was much more satisfied with RF Signal Tracker, though it has a lower rating at Play Store. Moreover, the dev was quite responsive back then.

You might wish to check some of the other candidates as well, but "back then" these two were my favorites. Both are available at no pay. Based on the exported data, you should be able to generate any graph you like – be it bar or line, and do all calculations with the software of your choice on desktop or mobile.

Not the answer you're looking for? Browse other questions tagged gratis android mobile or ask your own question.