What Linux distribution would you recommend for someone who isn't computer savvy.

The features that will need to be as easy as possible to use and access are:

Ideally it will be also be really easy and simple to perform updates.

I would like to suggest a point of view different from that of the other answers (which are all good).

Although Ubuntu and Linux Mint are good choices as user-friendly distro, my wholehearted advice would be this one:

Find someone around you that is a Linux geek and is available to support you, and install the same distro and GUI as him/her.

All Linux distros fulfill your requirements (email, web surfing, word processing, photo viewing, and accessing files from a removable device).
Also, all Linux distros have a characteristic: they come with a user-friendly GUI (e.g. GNOME or KDE) which will be the main interface you'll be using, but once you have to resort to shell commands, things are going to get difficult. This is true generally for the Linux OS, no matter which distribution you installed.

The underlying distro is not that important in my opinion. Having a person that can be aside you and giving you answers to your questions because he/she actually uses the same environment is much more important.

So, unless your friend uses one of those minimal / hacking-oriented / obscure distros, stick to him/her and you'll be fine.

I'm going to have to recommend Ubuntu. It's really simple to use and install. It has an awesome community that's ready to help anyone new to the OS. It also has a great package manager (GUI of course) where you can easily install email clients, internet browsers, word processors, backup software, and much much more. It also has a really simple update manager as well. This is what I first used when I started getting into the world of Linux and I recommend it to anyone else who wants to venture in as well. 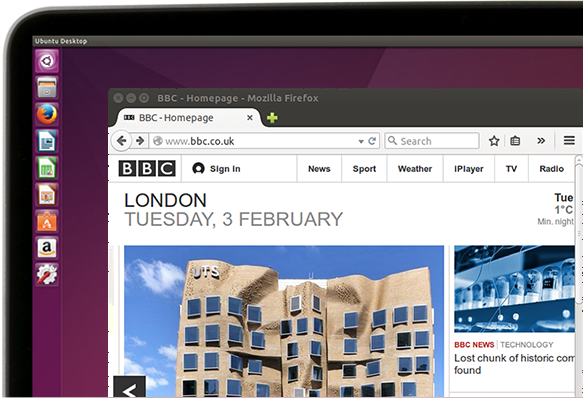 Take a tour of the OS here

This is fairly simple straight forward goddammn cool awesome looking distro. It is popular enough to get community support(there is even a stack exchange site for it).

It carries looks from OSX but is lightweight and easy to use. It's built on top of ubuntu, thus uses apt. 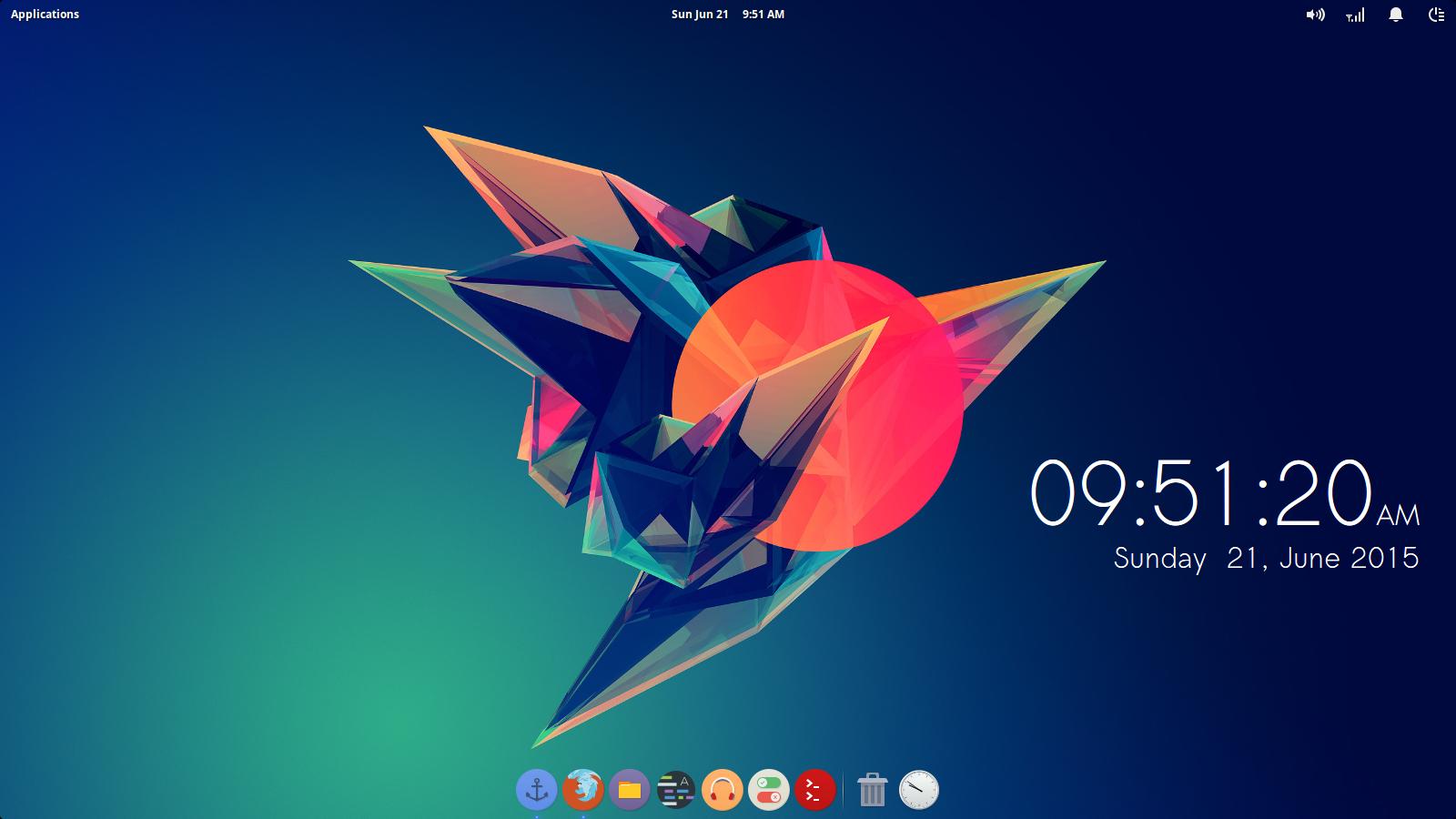 Just about any main popular distribution should qualify, testing a few is probably the only way to find one that's compatible with the hardware and that the intended user likes.

The distribution question is important for stability (like Debian's stable/testing/unstable), hardware & support & release model (fixed, rolling), but probably secondary to the question of which desktop environment (DE) they prefer. There are more than a few DE's pick from. See this Q for a brief overview: What kinds of desktop environments and shells are available?

A Virtual Machine (like VirtualBox or VMWare) is an excellent way to try out the "feel" of different Linux distributions. But, it won't tell you how they'll actually run directly on your hardware (a Multi Boot USB that can boot multiple ISO's would be great for that).

I really like Linux Mint. Comes with most of the things pre-installed that you want to use, not just web browser, email & word processing (almost every distro has those), but the non-free stuff that you'll usually want to install to other distros after installing. Like video/audio codecs (plays most every video/audio format you'd want & video DVDs), a flash player already installed (or waiting for a one-line install).

It's based on Ubuntu and shares their software repositories, almost anything that Ubuntu can do (like PPAs) Mint can do too. Ubuntu's based on Debian, so uses apt/dpkg package management, and Mint can do almost anything Debian can too. It's like getting 2 major distributions PLUS good stuff... (Ubuntu++?). When Ubuntu embraced the Windows8-like Unity desktop, Linux Mint stayed with more traditional desktops that many users (like me) prefer.

Linux Mint has several different "editions" based on different desktops (Cinnamon, MATE, XFCE, KDE), they're listed with screenshots on the Linux Mint homepage, and there's also a rolling Debian edition based directly on Debian (currently LMDE2 based on Debian Jessie).

Mint's "main" Cinnamon edition looks quite nice, and usually is ready a few weeks before the XFCE & KDE editions 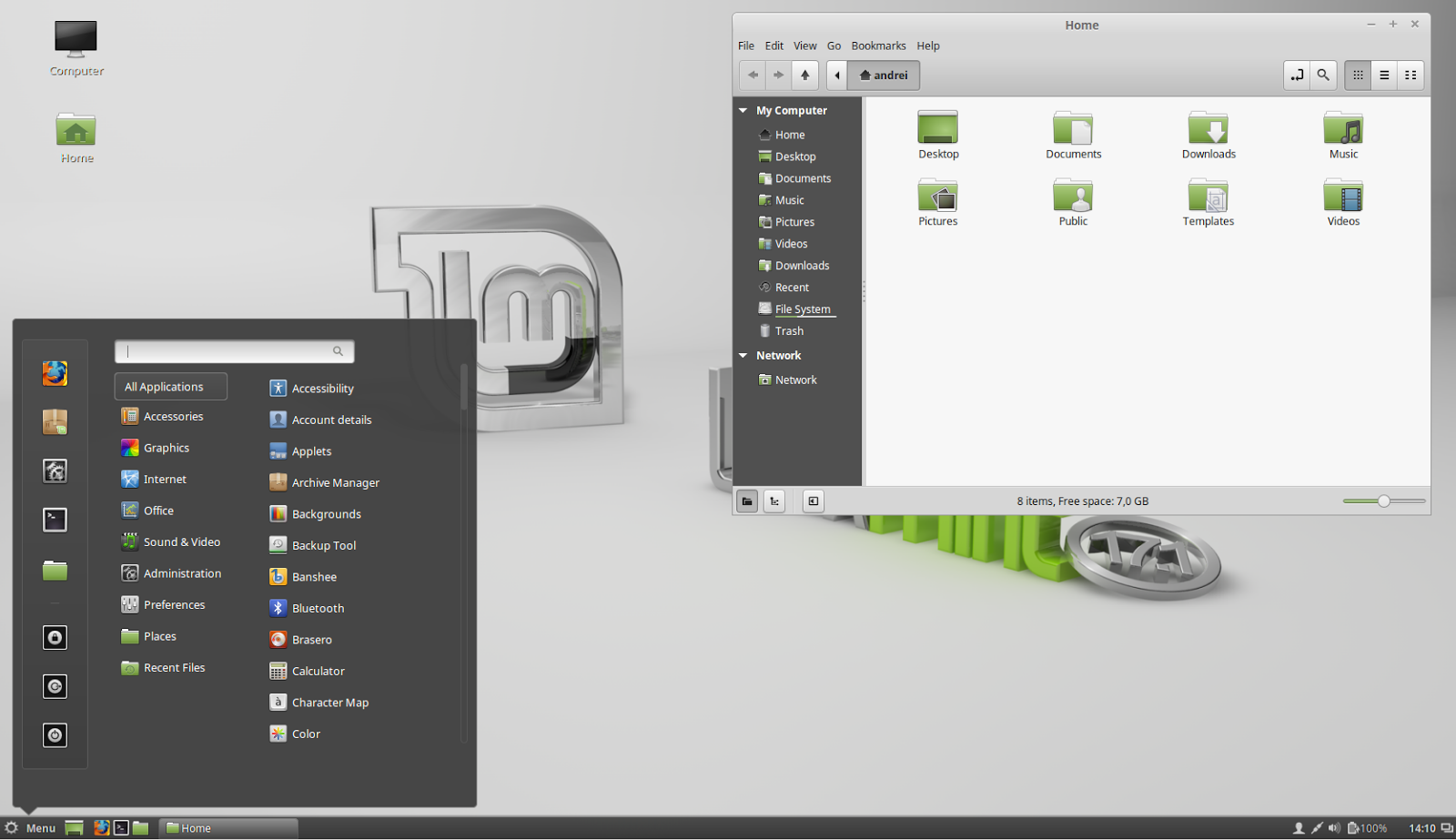 Mint's XFCE edition has been very stable for me (it's my favourite), and has the "classic" desktop look. Very similar to old Gnome 2 & MATE. 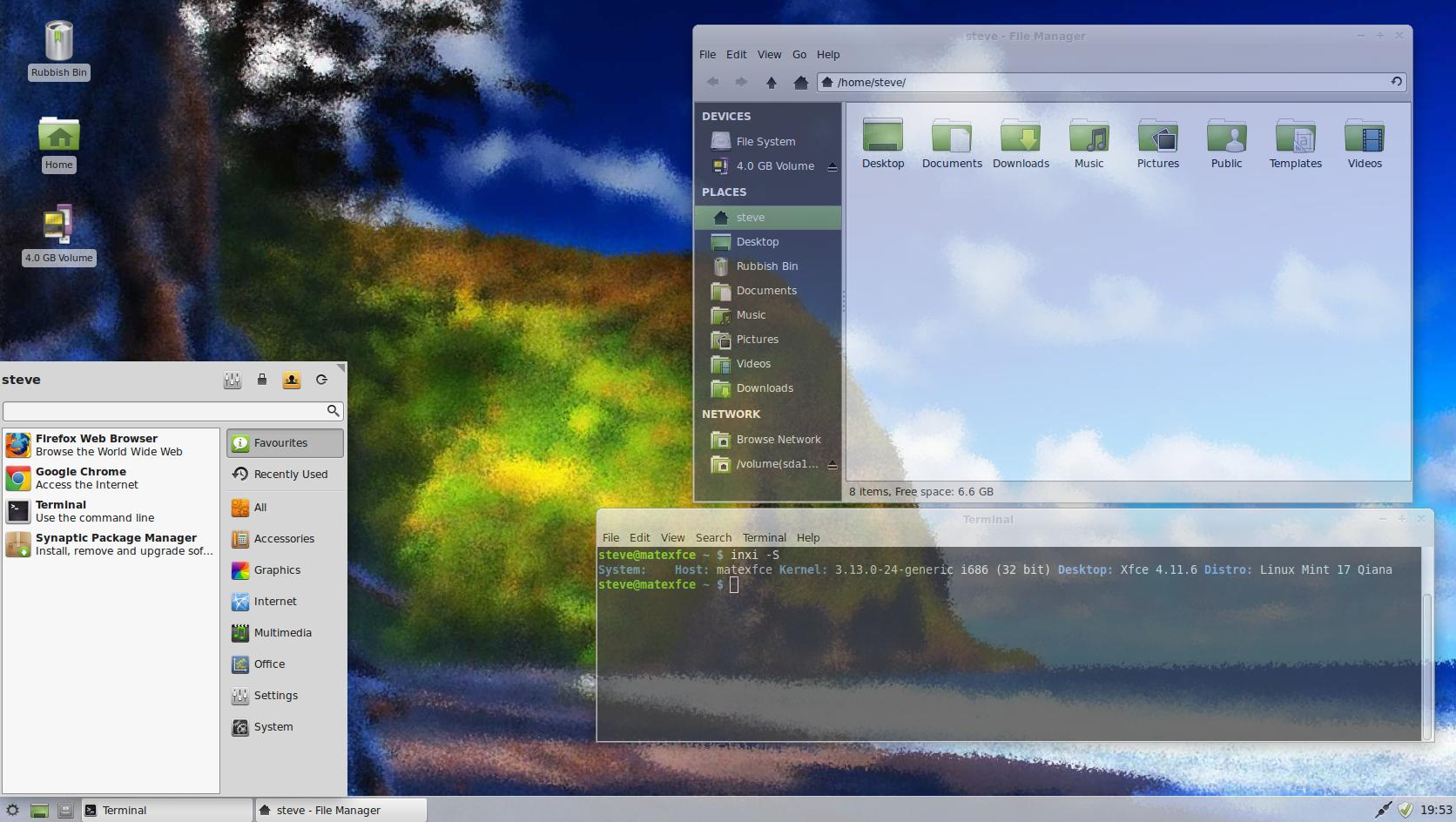 KDE is supposed to be more windows-like and an easier transition for windows users, some of it's programs are especially good, like k3b (cd/dvd writer) & kdiff3 (visual diff). 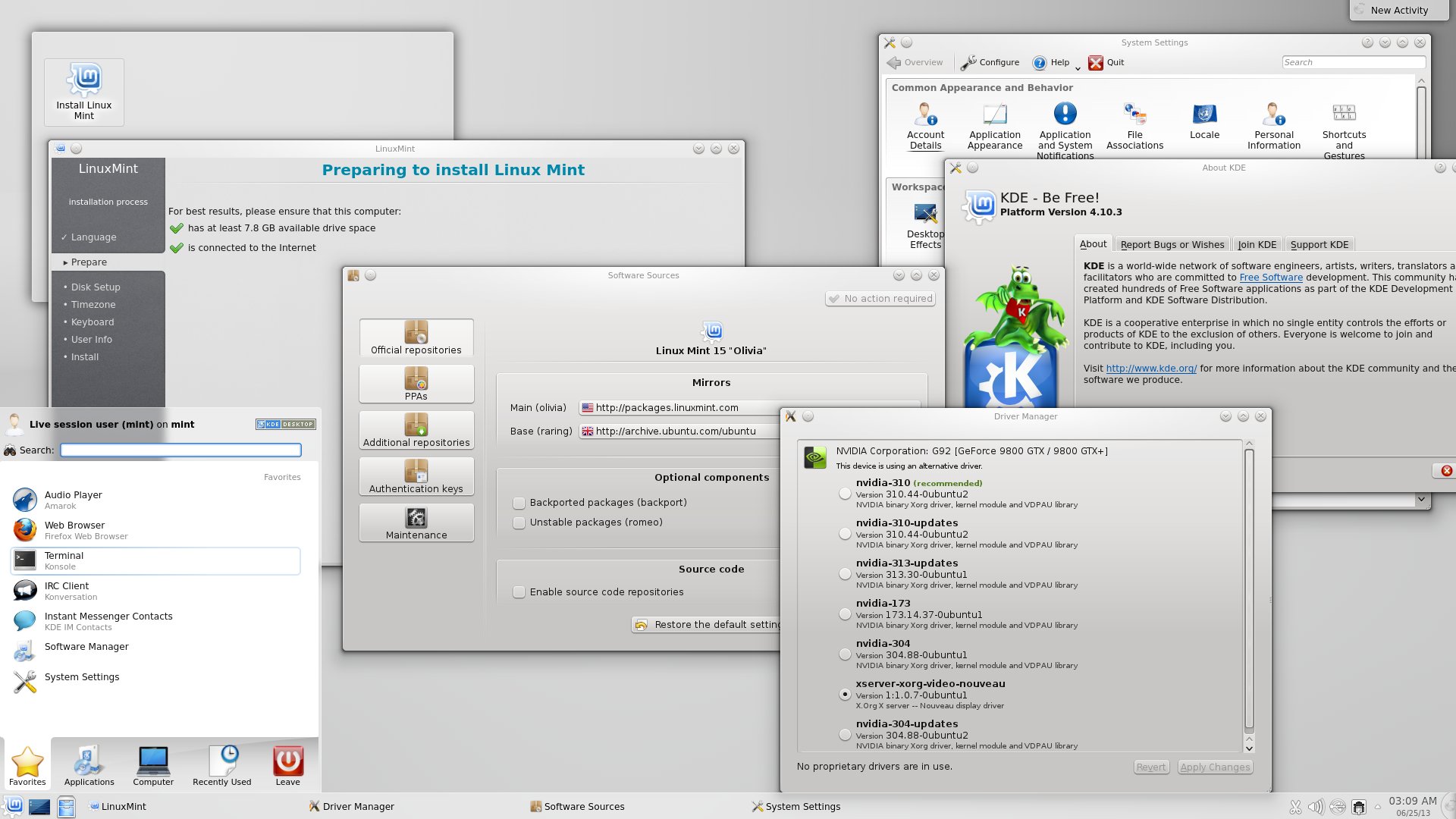 Linux Mint is also currently #1 (since 2012 to now-2016) on http://www.distrowatch.com which is an excellent site for searching through the different Linux (& BSD & other) distributions.

Ubuntu is your best pick if you want something basic. Luckily, Ubuntu is very nice and plays well with others, hence there are many Ubuntu 'derivatives'. Like Linux Mint and Zorin.

If you've played around in Windows and want to keep things familiar, try Zorin. It's an Ubuntu derivative that tries to continue being Windows like. After I bought a laptop with Windows 8 preinstalled, and updated it to 8.1, I felt really unsatisfied and searched up for easy Linux distros. Zorin was the top of the list if you're a Windows user.

As a small guide, I'd suggest looking through DistroWatch. The hits per day 'ranking' tree on the right usually has user friendly distros on top. Zorin may be a bit hard to set up for beginners, so here's a basic search for the beginners tag.