I'm looking for a photo gallery/file manager application which allows you to create galleries / tags and then quickly (e.g., with a single*click/tap/drag-n-drop) add an images to it, in a way that one can cycle through photos and quickly tag them with approximately spending 1 second per photo.

The closest I have found is CleanPhoto, which previews images in the center and you can click on a folder on the bottom to move it to that folder/album. However, it's not a real tag since a single photo cannot be in more than one folder/album. Is anybody aware of an app which supports similar functionality but without this restriction?

Please also mention how the tags / album information is stored in each app you recommend: by copying/(sym)linking image files to another directory, by modifying original image metadata, or by creating additional app-specific metadata (in this case how to export it?).

There are multiple gallery apps sporting a tagging feature the one or the other way – though I know of none that would be a perfect match for you. However, some come real close. Note that I've not used any of them myself, so I can only tell what their descriptions say and rate them by their resp. Playstore rating (and I've picked only those with 4+ stars which have been updated at least once in the past year). 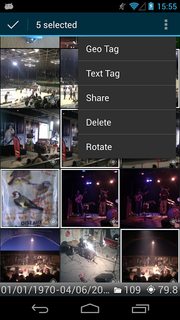 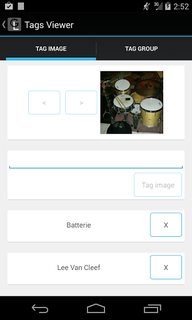 As the screenshots show, you can select multiple photos to be "mass-updated", and then add tag(s) to them. Selecting enough photos at once for batch-processing might match your "1 second per photo" this way. It doesn't say where the metadata is stored, so I assume it either uses Android's media storage or its own database for this.

Second good candidate you might wish to take a look at is F-Stop. Here you might favor it stores all the metadata (tags, ratings) in XMP format so they stay with the image and can be read by popular programs such as Lightroom, Picasa, Aperture, Windows Live Photo Gallery, digiKam and many more. It does however give no details on how they are applied – so I can't tell you whether some "batch updating" is possible, or you could match the "1 second per photo" by other means. Moreover, writing tags is only supported in the paid version. But then it also has albums, nested albums, smart albums – which gives you quite a few ways to organize your photos.

There are several more "possible candidates" (just check my list of photo Viewers and, on that page, Ctrl-F for "tag"). But none of those known to me mentions how the user is supposed to add tags. Two of them say they "auto-tag your photos while you take them" – and while that definitely would match your speed-wish (much less than 1 second per photo ;) I doubt it's what your looking for.

So the two candidates named seem to be your best bets. Give them a look, they have "free versions" available (which I linked).

Not the answer you're looking for? Browse other questions tagged android images file-management photography gallery or ask your own question.