Program to check if there is a newer version of executables

I have a Programs folder with hundreds of programs in it (some portable, most are installers), like 7-Zip, Adobe Flash Player, the Microsoft Visual C++ Redistributables, etc.

Of course, most programs are regularly updated, and as a result of that some of the programs/installers will be outdated from time to time. However, I don't want that. I want to have the most recent installer/program at all times.

At the moment I have to go to each program's website, compare the latest version on the website with the version I have downloaded to see if there's a newer version, and then download the newer version (if there is one). This can be quite a tedious task, especially when you have more than 200 programs.

I would like to be (partly) relieved of this manual and laborious task. Preferably I would like a program that checks every executable in my Programs folder to see if there's a newer version, and then download it, but I realise this could be an impossible task.

In a nutshell, I'd like a program that does this:

Some facts about my 'programs database':

I know of FileHippo AppManager and SuMO Lite, but they're both mainly meant for installed programs, so they're not an option for me (I don't want to install every single program just to check if there's a newer version).

I also know that a similar question has already been asked, but that one's closed and is more than a year old.

The program you are looking for is SUMO (Software Update Monitor), I have the same sort of structure like you with just executables (self-made portables from ordinary installations later uninstalled), and because that I faced for long years the same problem of yours manual updating each program, but then one day I discovered this application and my life changed for better, I totally recommend you it, it meets all the requisites that you expect. 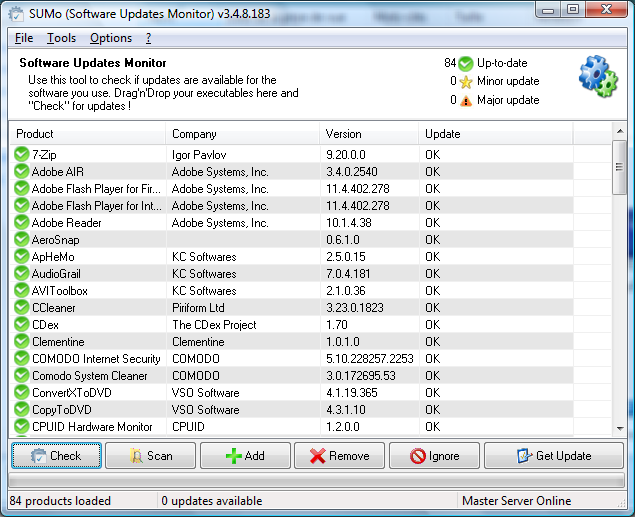 Personally, I would use a little python script and just have a single file, a number of formats spring to mind, with, for each program:

The python script could then parse the file, visit the site using the requests library, decode the version information of the available versions and compare with the current, do the download of the latest, update the index file and optionally notify you &/or install the update.

This could be run manually every so often or could be auto started periodically.

I use the Update Scanner addon from Firefox daily.

Because of the most tedious work is to maintain the 'realtime' application updates url list, that addon comes in handy for checking changes in that urls.

Of course, you'll have to investigate yourself which the download urls are. This is a big work for the first time.

Not the answer you're looking for? Browse other questions tagged windows or ask your own question.