Android app to add latitude+longitude to an existing picture

I want to add coordinates to a picture that has been taken without GPS activated.

Any app for this?

Oh, there are several of those. I have not tried any of them myself, but the probably best candidates seem to be:

EagleEye is probably the best choice here. I use its companion app PhotoMap, and am quite happy with it (it's based on the very same code, but rather a "lite" version lacking e.g. the feature to show pics without GeoTags and add the latter). Support is superb, issues I had were usually fixed within a week (if not faster).

For your task, it shows you the picture along with a map, and lets you visually move the "pointer" to the coordinates you want to write to the photo's Exif data: 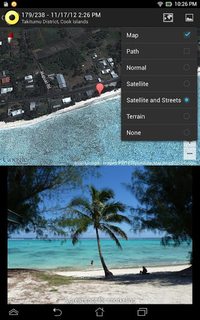 Of course you can edit existing GeoTags the very same way: simply drag the baloon to where it belongs. The app has a ton of other useful features, including

And more. EagleEye is free and without any advertisements. Though I didn't use the app (yet) myself, most of its features (and behaviour) is known to me by its sister-app I'm using. Runs stable, is fun to work with. In short: This one you should definitely give a try :)

Not the answer you're looking for? Browse other questions tagged android photography gps exif or ask your own question.

4
Android picture privacy filter (via Share intents)
15
Map of Wikimedia Commons pictures
1
Android app/intent to add text metadata to a picture
8
Take GPS coordinates+pictures+memo of a point of interest, on offline Android
13
Android app that takes a picture every X second
2
Android app to anonymize a JPG picture but leave latitude/longitude and time