I'm seeking recommendations for an Android app that will backup/restore data for selected apps and maintain multiple versions of the data.

The paid version of Titanium Backup does this, but I'm looking for a gratis solution.

Note that root apps are fine, just please specify whether or not the app requires root for this functionality.

Helium - App Sync and Backup (originally named Carbon) has a gratis version and can do that: 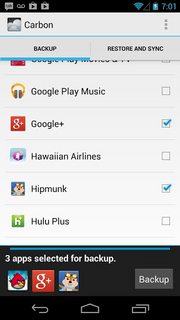 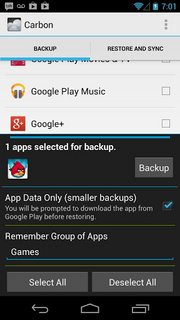 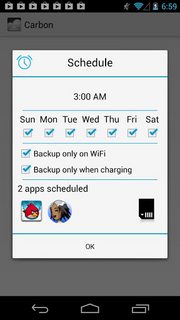 It's quite a while since I last used it – but AFAIR it stored multiple sets for each app. You can decide whether the .apk should be included with backups as well (by default it's not), and setup groups of apps for scheduled auto-backups. A detailed howto can be found here; note that on rooted devices you can skip the "activation stuff" (which requires desktop interaction, and most likely does nothing but start a local ADB daemon to interact with).

Backed-up files are using the very same format as ADB's backup does, so the plus is you can even restore those from your PC. Using a file-sync app to sync your backups with your PC, you could even support more "backup sets" (e.g. using a script on your computer to round-robin-rename the target directory to something like backup.[0-6] (weekdays).

Helium has a paid version as well, supporting Cloud storage for those who like that.

Back then, I stuck with TiBu (more flexible, more features) – just wanted to see how Helium works. It's definitely easier to use than TiBu – but then, it has far less features to care for :) Btw: another plus of Helium's paid version is the ability to sync backups across devices: start a game on your phone while on the train from work, continue playing at your tablet when reaching home :)