I am looking for an open source non linear video editor. It should ideally be as professional as possible (ex. support for many codecs, lots of features, works well, can edit theater grade movies.)

I know there are a number of free (as in no cost) editors that also have a paid version. Are any of these recommended as an alternative to genuine open source?

I'm not concerned about what platforms it runs on, but preferably Linux.

It's an extremely professional video editor that's been used in several Academy Award and Emmy winning movies. Some notable movies that used this editor in production include The Wolf Of Wall Street, Pulp Fiction, and The King's Speech. 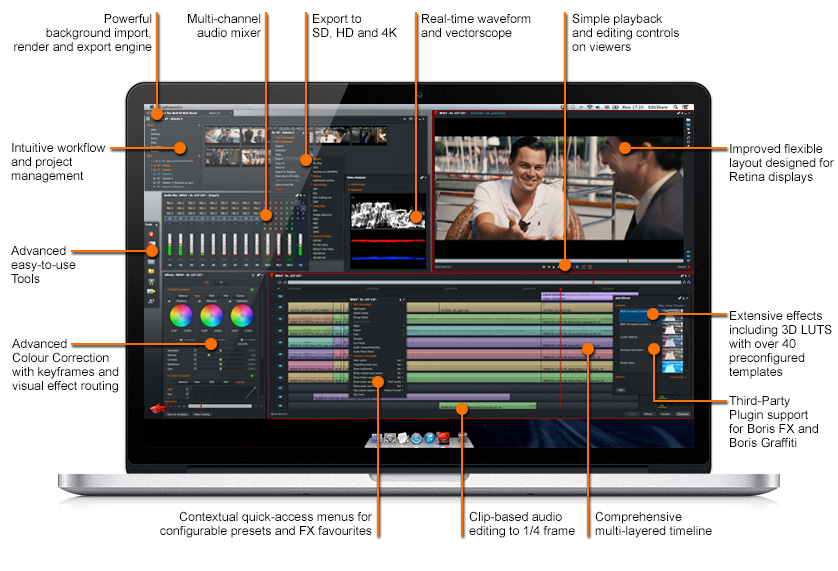 Lightworks has the widest native format support available in any professional NLE. MXF, Quicktime and AVI containers, with almost every format you can think of importing natively without the need for transcoding, from ProRes, Avid DNxHD, AVC-Intra, DVCPRO HD, RED R3D, DPX, AVCHD (with AC3 audio), H.264, XDCAM EX / HD 422, all on the same timeline in realtime. Check out the detailed Tech Specs for a full list of supported formats.

The only possible concern you might have is that it's not technically open source yet. There have been plans to make it open source since 2010 but there has been little progress in the last five years. According to the site's FAQ:

Once the Linux and Mac versions are released the source code of Lightworks will become available. We cannot give a date when this will happen, but announcements and updates will be regularly posted on the Lightworks Forum

It's worth noting that the Linux and OSX ports were officially released on August 29, 2015. In any case, this might be a cause for concern if you feel strongly about open source software.

Currently, there are two Lightworks versions, the Free and Pro versions. However, they are essentially the same, except the Free version has limited export options. You have 'full editing power', but export options are limited to MPEG-4 (Web, YouTube and Vimeo) at 720p resolution. This might be a deal-killer for you if you're looking to use this in a professional setting.

blender 3d is full-featured 3d editor. It can also be used for non-linear video editing and has rich asset of effects. The only drawback is that blender is quire unstable and require large amounts of RAM, 64GB and better.

Kdenlive is a free open-source video editor for GNU/Linux and FreeBSD, which supports DV, AVCHD and HDV editing.

Kdenlive relies on several other open source projects, such as FFmpeg, the MLT video framework and Frei0r effects.

It supports a wide range of codecs and formats.

Not the answer you're looking for? Browse other questions tagged open-source video-editing or ask your own question.